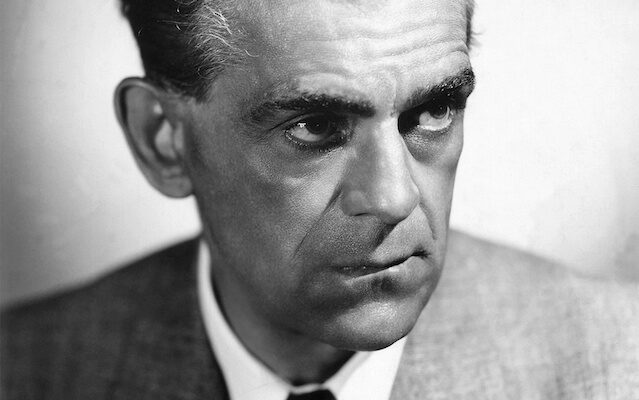 William Henry Pratt was Billy to his friends and family and Boris Karloff to the rest of the world. The iconic actor and king of horror turns 130 today.

Over the course of a six-decade career, he gave stirring performances in film, theater, TV and radio. He was a pioneer in the American labor movement and won a Grammy. He was an effective dramatic and comedic actor and beloved by children.

But Boris Karloff was a giant of horror.

On Karloff’s 130th birthday, Halloween Every Night chats with author Stephen Jacobs, who wrote the only authorized biography of the actor, Karloff: More Than a Monster, which will get a second edition in 2018.

Halloween Every Night: Why did William Pratt change his name to something — certainly distinctive — but potentially as typecasting as Boris Karloff?

Stephen Jacobs: He never actually said – aside from commenting that he didn’t think the surname ‘Pratt’ was suitable for the stage. It’s doubtful that he thought of typecasting as such when he decided upon a ‘stage name.’ It served him well before he even made Frankenstein and the reason he won many ‘bad guy’ roles was more to do with his looks than his name. The Russian sounding surname was the reason Michael Curtiz employed him for a role in The Mad Genius (1931). It’s only in retrospect – after his successes in the horror genre – that his name has taken on that sinister connotation.

HEN: Is it true that to his family and friends, he never used the famous name and never legally changed it to Karloff?

SJ: That’s true. His family and friends knew him as ‘Billy’ and he signed letters to them in that manner all his life. In 1952 Karloff was asked if he intended to apply for American citizenship. He said he wouldn’t. Although the States had been very good to him, he said he’d be a hypocrite if he was anything but British. I think this attitude also extended to his name. He may have been Boris Karloff in public, but at home and with family he was Billy Pratt.

HEN: He’d done some good supporting work, but also lots of manual labor before Frankenstein, so he wasn’t really in a position to poo-poo a role like that. But how did he approach the role at the time and do you know how much he discussed the role with James Whale?

SJ: The impression by many is that Karloff was a struggling actor plucked from obscurity to play the Monster in Frankenstein, which made him famous overnight. In fact, he had been making films since 1919 and had risen through the ranks to become a solid supporting actor garnering onscreen credits and good reviews. The periods of manual labor were trusted fall back positions when the acting work wasn’t forthcoming. He was used to hard work by then as he had various manual jobs even before he started acting. During one hiatus in 1923-1924 he worked in a yard loading and unloading sacks of cement. This work, especially, aggravated Karloff’s back problems that would stay with him his entire life.

Rather than poo-pooing the role of the Monster, Karloff embraced it. He was, famously, working on the picture Graft at Universal and, fortuitously, was in the right place at the right time. Having lunch in the commissary, he was spotted by James Whale who invited him to audition for the role of Frankenstein’s Monster. All it meant to Karloff at the time was it was another job.

According to Mae Clarke, who played Frankenstein’s fiancée, Elizabeth,  Karloff and Whale got on well together and would confer on how to play a scene. Clarke also said that all the gestures Karloff made as the Monster were Whale’s – “I saw him do them,” she said.

“When he first said ‘sit down,’ Whale mapped it all out. He said ‘Now you don’t know what sit down means, but you know – because his hands are going that way – that he means back. So you go. What am I doing? Hands. Where do I go? You hit the chair, you go down.’”

HEN: And for that matter, how much of Karloff himself, in your estimate, is in his portrayal of the monster?

SJ: I think quite a bit of Karloff is in the role. One has only to look at his previous film roles to see that the actor had also brought a lot of his own to the role. His character, Galloway, in The Criminal Code (1931), which Karloff had made before starting work on Frankenstein, immediately springs to mind.  Galloway’s stooped walk and the way he holds his hands are reflected in the Monster.

HEN: How did he view the role after the success of the film?

SJ: He always loved the Monster and called him ‘my best friend.’ Unlike some actors who disdain the roles that made them famous, Karloff remained very appreciative of the role and what it did for him. He refused to continue playing the Monster after Son of Frankenstein (1939) as he could see the way the character was going – becoming an “oafish prop”. ‘I owe him so much,’ Karloff explained, ‘that I owe him a little respect, little rest.’

HEN: He did lots of stage work, most famously is probably Arsenic and Old Lace. What did he like about the theater?

SJ: It sounds like a cliché now, but Karloff’s first love really was the theatre. As a boy, in London, he would save his money to buy tickets. Later it had an adverse effect on his education. ‘I was supposed to be reading for the exams, instead of which I haunted the galleries of all the theaters of that time,’ he said. ‘I used to haunt His Majesty’s Theatre, with Tree and Lyn Harding and Constance Collier, that wonderful trio that held forth there.’

Although he made his name in the movies, Karloff returned to the theater often. Some productions, like Peter Pan or The Lark were big successes, while others like The Linden Tree or The Shop at Sly Corner, failed. Arsenic and Old Lace was the play Karloff returned to the most, appearing in adaptations on stage, radio and television. Sadly, he never got the chance to appear in Frank Capra’s movie version. It was feared the stage play would close if Karloff left to make the film and he was replaced in the film by Raymond Massey.

When Karloff starred in Peter Pan, he loved to peek at the audience from behind the curtain. Watching the children in the audience frantically clapping their hands to save Tinker Bell was, for Karloff, one of the most thrilling moments in the theater.

HEN: The culture was different back then. How did Karloff view his work as non-white characters, in particular, asian characters like Fu Manchu or Mr. Wong?

SJ: You’re right – the culture was much different back then. Actors felt no qualms about donning character makeup that would now cause an instant outcry – just look at the work of Lon Chaney Sr. or Al Jolson. As such, I’m sure that Karloff just saw it as another job. Many Caucasian actors played Asian characters – Warner Oland, Sidney Toler, Peter Lorre etc. It’s worth mentioning that Karloff’s portrayals were not ridiculous or overtly stereotypical like Mickey Rooney in Breakfast at Tiffany’s (1961), but remained dignified.

HEN: I love that he had a weekly children’s radio show in New York in 1950. Also, that he handed out Christmas presents to disabled kids every year. Why were kids so important to him?

SJ: Karloff was always popular with children. A member of one of Karloff’s theatrical companies later recalled that in 1918 it was a common sight to see Karloff walking down the street followed by six or eight children. Karloff felt that children were often under estimated. When Frankenstein was released, children were allowed into the cinema to see it. Some parents and civic groups thought the picture could be to scary for the little ones and be restricted to an adult audience. “The children thought otherwise,” Karloff explained. “On the very first Halloween after the film’s release, a crowd of laughing, pint-sized ghosts and goblins rang my doorbell and invited me to join in their trick-or-treat rounds. As I wasn’t appropriately costumed, I had to decline. Over the years, thousands of children wrote, expressing compassion for the great, weird creature who was so abused by its sadistic keeper that it could only respond to violence with violence. Those children saw beyond the make-up and really understood.”

HEN: He does How the Grinch Stole Christmas in 1966. Wins a Grammy for the recording of it. Was that something of a vindication for him as an actor and how did that help the public re-assess him at the end of his life?

SJ: I don’t think it was really a vindication. I don’t believe Karloff ever needed vindicating. He had no problems with being typecast. He felt he was very lucky to have a ‘type’. While he was known as ‘The King of Horror,’ he did many other things. He appeared on television in a wide variety of roles, he had a long career on radio, he made records for children etc.

HEN: Lastly, is there one thing you’d really like people to know about him that they probably don’t?

SJ: Karloff was very proud that he was one of the founder members of the Screen Actors Guild. Karloff had several run-ins with Universal and witnessed mistreatment of his colleagues by various studios. When working on Frankenstein, a 15-16 hour day was not unusual for him. Karloff eventually argued that his time in the makeup chair should count as work. Universal disagreed and so Karloff appealed to the Academy – and won. A few years later, when Universal failed to give him the agreed pay raise, Karloff walked. And so, when the prospect of starting a union was bandied about, Karloff eagerly agreed to get involved. This was at a time when any whiff of such actions could lead the studios to be done with you. Your career could be over. Meetings were held in secret and membership grew. On 30th June 1933, the Screen Actors Guild’s articles of incorporation were filed. The Guild lasted until 2012 when it was merged with the American Federation of Television and Radio Artists (AFTRA). It is now known as SAG-AFTRA and has over 116,000 members.