George A. Romero: ‘Godfather Of The Dead’ Still Looms Large 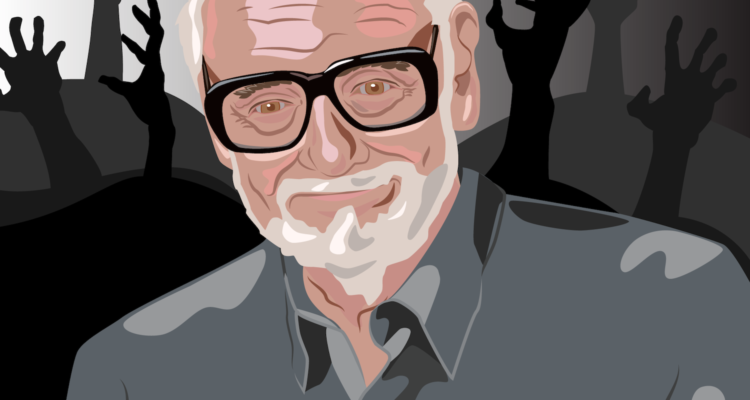 Iconic filmmaker George A. Romero would have turned 80 in February 2020. But he lives on in his own films as well as the films of others including his son, George C. Romero. / Illustration by Scarlett Kirn

George A. Romero would have turned 80 years old in February. Gone, but absolutely not forgotten, the iconic writer/director and “Godfather of the Dead” remains a large presence on TV and movie screens around a planet that has, since his first feature film, seriously pondered a zombie apocalypse.

Born and raised in New York City in the times before cable, he rented actual film reels to watch at home. Romero was one of two people who repeatedly checked out Michael Powell’s opera-based fantasy The Tales of Hoffmann from a Manhattan rental house. Reportedly, the other person was Martin Scorsese.

Romero’s association with Pittsburgh began with his college years at Carnegie Institute of Technology. After graduating in 1960, he got a break shooting a segment for Mister Rogers Neighborhood and formed Image Ten Productions, the company that produced his classic Night of the Living Dead in 1968.

He famously neglected to copyright the film, which might have been a blessing in disguise. Though it deprived him of a healthy stream of residuals, it allowed the film to be seen more places big, small and virtually everywhere — including bits in other movies — that spread the images and the sort of gospel of the film. It’s arguable the world might not be nearly as obsessed with zombies these days without the Night of the Living Dead being so incredibly accessible.

From that, Romero built his unusual success in film, constructing a legacy of zombie films infused with social commentary that has lead to a long line of TV shows, movies, music, comics, and video games made by people heavily influenced by Romero.

He followed NOTLD with Dawn of the Dead in 1979 and even greater success, a film that critic Roger Ebert considered one of the best horror films ever made.  His Living Dead series ultimately continued through six films that administered scathing critiques of militarism, classism, social media, found-footage films, and tribalism.

Of course, Romero also managed to make other notable works on TV and film. Martin, his personal favorite, explored the inner struggle of a young vampire; The Crazies seemed to expand on the the living dead ideas and directly inform films like 28 Days Later; his TV show Tales from the Darkside, was a perfectly designed Twilight Zone for basic cable in the 1980s.

Two more Living Dead sequels were in various stages of development when Romero died of cancer in 2017. Tributes poured in from around the entertainment world by people who were influenced and affected by his work.

Guardians of the Galaxy director James Gunn tweeted, “You made me want to make movies, and helped me to find meaning in monsters.” And later described the importance of NOTLD to him personally as being  “so incredibly DIY I realized movies were not something that belonged solely to the elites … but could also be created by … the people who simply loved them.”

Hostel director Eli Roth noted,“Romero used genre to confront racism 50 years ago. He always had diverse casts, with Duane Jones as the heroic star of NOTLD. Very few others in cinema were taking such risks. He was both ahead of his time and exactly what cinema needed at that time.”

Comedian Gilbert Gottfried joked, “Could someone please call the police? George Romero is eating my leg.”

Writer/chef/TV traveler Anthony Bourdain, less than a year before his own passing, said Romero “changed everything.”

Jordan Peele posted a picture of actor Duane Jones in his groundbreaking NOTLD role of Ben and simply said, “Romero started it.”

Peele’s right. He did.