Do You Believe In Love After Death? 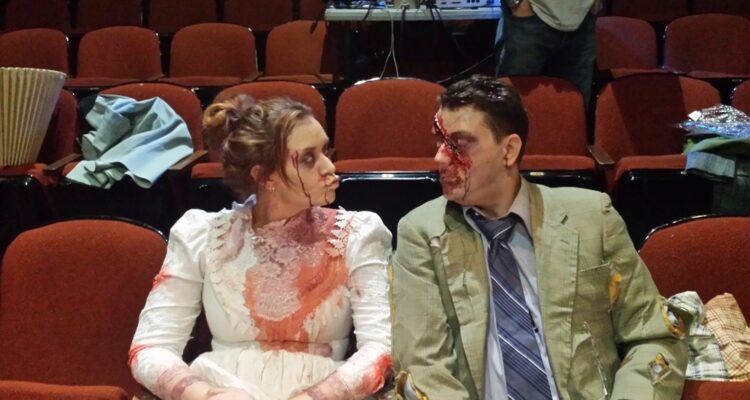 Becky and Chris Jones of Fullerton enjoy a moment together during rehearsals for the Maverick Theater's "Night of the Living Dead" annual production. The two met while playing zombies in the show, fell in love and married a year and half later. Photo courtesy Chris and Becky Jones.

This is not exactly a story you’ve heard before.

They saw each other across a crowded room (full of zombies). As all the (staged) craziness of the world seemed to stop for a moment (actually, it had), a (zombie) girl stood at her window, looking for a sign (from the director).

In that moment (in rehearsal), their eyes met (through her white contact lenses). The boy seized the moment. He winked. She (the zombie girl) wondered.

“Who’s this strange guy winking at me?” smirks Becky Jones, retelling the moment. Sitting next to her on the giant couch is the guy, now her husband, Chris Jones.

Becky works at a private investing firm and Chris is a manager of an environmental testing company. For fun, they both do a bit of community theater. Were it not for the continuing success of the Maverick Theater’s annual Night of the Living Dead production every October, we wouldn’t be having this conversation.

Becky joined the cast of the Maverick’s Zombie Love in 2011 as a favor to a friend. Her friend coaxed her into joining the cast of NOTLD the following year. “You’re crazy, that looks like a lot of work” she told the friend.

Chris started at the Maverick in 2011 as well, but worked behind the scenes for a few shows a year, including NOTLD. Somehow, even in the small theater, they just missed each other.

“He’d do his tech stuff and leave. He wouldn’t talk to anybody,” Becky says. “He was like this ghost who’d put props in their place and disappear.”

Then Chris moved up, eh, or down, depending on how you look at it. “Three years ago, I started being a zombie,” he says.

But the newly (love bug) bitten zombie boy needed a reason to talk to the seasoned zombie girl.

“I had to have somebody put my contacts in,” Chris says, “So, why not have Becky put them in and get some one-on-one time?”

Many actors who don’t normally wear contacts struggle puting in the white theatrical contacts that give zombies that special look.

“I’m thinking, ‘is he flirting or can he really not put his contacts in?’” Becky says. “Bless his heart, his eyes were bright red and had tears running down his cheek and here I am, ‘Did you really try?’”

In their down time, they got to know each other, covering all the topics early and agreeably. But Becky was in a long-term relationship and Chris had plans to move to Kansas to start a business when the run was over.

After the closing show of the 2015 production, Chris said his goodbyes to the other cast, handed Becky a bouquet of white roses, and thanked her for the time they’d spent together. He then headed toward the door and a future in the Midwest.

As Chris left the theater, Becky followed. They arranged to have dinner the following night, so Chris can help Becky learn her lines as an understudy in the Maverick’s Plan 9 From Outer Space the following weekend. Over pho, Becky told Chris she was breaking up with her boyfriend. She considers it their first date.

A year later, Chris proposed. Most of it Becky says she was too excited to actually hear, but said yes and they were married about 7 months later.

Though mostly traditional, the wedding did include touches of the macabre, hints to how they met.

“We had a zombie table with zombie pictures,” Becky says. “There were splotches of blood on the lace.”

Now each October, they put aside their normal wedded bliss to spend their weekends in torn clothing, fake blood and those white contact lenses. It keeps the spark alive for them, even if some people still don’t get it.

“I tell people it made it easy,” Becky says. “We were doing a show at a theater and if he saw me as a zombie, the worst I could possibly look, and I changed in front of the guy for two months, what’s left, you know? It just gets better.”