‘Christmas After Dark’ Brings Some Jolly, Effed-Up Holiday Cheer to the Stage 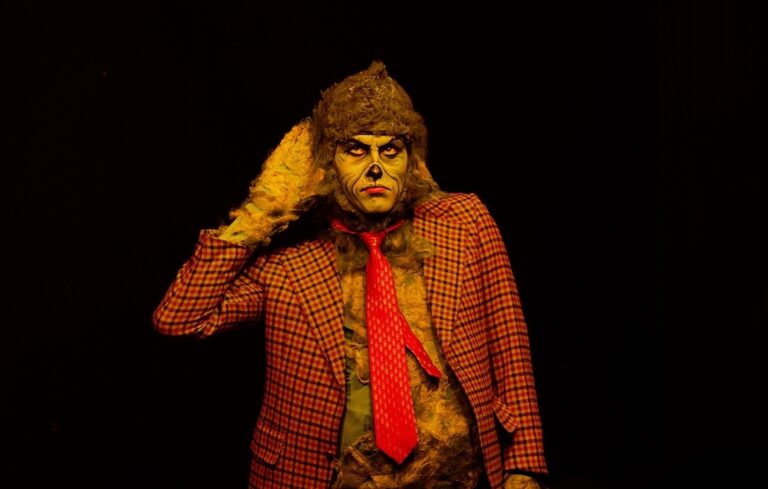 Christmas is on its merry way but not everyone wants to celebrate it all jolly and nice. Some of us enjoy holidays with an edge.

Case in point: Worst Ever Productions’ Christmas After Dark — a dark-comedy anthology made up of eight short plays designed enthusiastically for Santa’s naughty list.

Made up of two acts, the show features thought-provoking pieces pondering questions like —What if Santa was a vampire? (A Stake of Holly) — as well as more traditional pieces sent awry (A F*cked Up Christmas Carol). And there’s some tragedy in there too with See Rudolph Die — which is still oddly hilarious. Also, you won’t want to miss insult comic (but in a good way) Tosca Minotto — aka Mrs. Claus — who hosts the show.

The show runs through Dec. 12 at Zombie Joe’s Underground Theatre in North Hollywood. We chatted with Producer/Artistic Director Andy Shultz for some insights about the show.

HalloweenEveryNight: Tell us a little about the history of Christmas After Dark.

Andy Shultz: The first Christmas After Dark in 2019 was a complete spur-of-the-moment thing. We were starting pre-production on a family-friendly Christmas show, Christmastimes, when Brian Larios emailed me this insanely funny short script. It was a buddy Christmas comedy … with zombies. I fell in love with it. So, in a random moment of madness, I decided we were going to do two holiday shows each night: the family-friendly show at 8 p.m. and then Christmas After Dark at 10 p.m. And luckily, it was a huge success. We had planned to do Christmas After Dark again in 2020, but with COVID, we opted to postpone till we could get back into a theater. Which is why I’m so excited to bring it back to the stage this year, but with eight brand-new tales.

HEN: How would you describe the show’s format?

AS: It’s a short play festival consisting of eight 10-minute plays. The only thing that the pieces have in common is that they’re Christmas comedies. Some are just funny and others are dark and funny. And it’s all hosted by our special guest visitor from the North Pole, Mrs. Claus.

HEN: What themes can we expect this year?

AS: Audiences can expect to have a fun night. We have everything from slapstick comedy to dark, dark takes on what is normally a friendly holiday. There’s going to be iconic monsters, numerous elves, murder, mayhem and shenanigans. We also have four very different Santas, one whom will deal with the most evil entity of them all: the DMV. We definitely touch on a few social issues that have come to light in recent years — such as depression. In regards to COVID — kept the topic out of the shows. We want the audience to be able to escape for a bit and just have fun.

HEN: Have you noticed a big demand for bringing together Halloween and Christmas?

AS: Oh yeah. Halloween has become much more than a holiday. It’s become a lifestyle. And it’s been integrated into everyday things. And with us being in California, which has probably one of the, if not the largest, haunt communities in the world, there’s a huge audience for it. You can see it with the numerous Christmas horror movies coming out each year. Krampus has been becoming more and more common of a household name. And even the team behind Midsummer Scream created a Christmas-themed Halloween/horror convention, Season’s Screamings. The fans want it. They want that Night Before Christmas-like mashup.

AS: We’re just so excited to bring this show to a live audience. We hope that everyone can come in, forget their troubles, and just have a good, fun time. We’ve done everything to keep this show fun and safe for the cast and crew. And we plan to do the same for our audience.