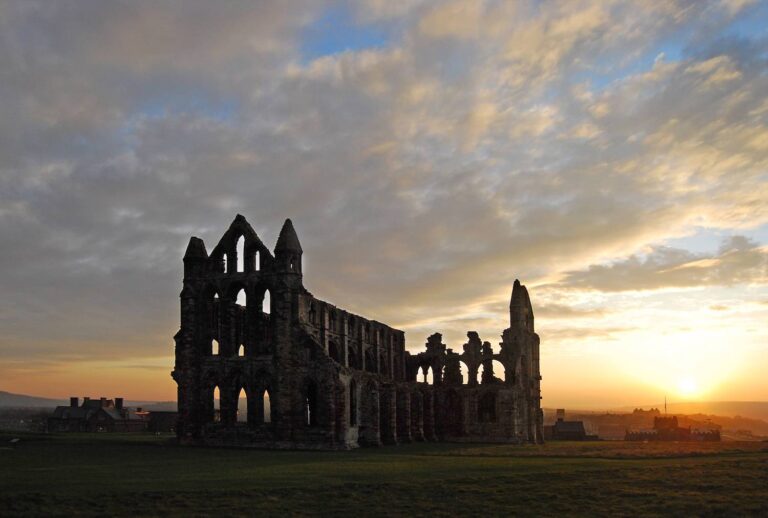 More than 1,300 people gathered to break a Guinness world record for people dressed as vampires to celebrate the 125th anniversary of Bram Stoker's "Dracula" at famous Whitby Abbey in North Yorkshire, England, a site featured in the book. / Photo by Ackers72

Black figures gathered on a Yorkshire hilltop at the foot of a crumbling Whitby Abbey. In their cloaks, their fangs, and their enthusiasm, they defied English sunlight and did something we don’t expect “vampires” to do: Set a world record.

In celebration of the 125th anniversary of Bram Stoker’s classic novel Dracula, the charity English Heritage convened 1,369 people in their gothic finery on May 26, 2022 to set a new world record for what was defined as “the largest gathering of people dressed as vampires,” according to Guinness.

The requirements to achieve the record were clear, and several were turned away for not meeting the guidelines: Black trousers or dress, black shoes, shirt and waistcoat, black cape or collared overcoat, and fangs on at least the top set of teeth. Then, once said vampires were wrangled into a roped-off pen next to the 7th-Century monastery, Guinness World Records adjudicator Jack Brockbank counted off the five minutes needed to break the record.

The previous record of 1,039 people, set at Doswell, Va. in 2011, was easily broken by English Heritage’s gathering of 1,369 vampires. The charity plans to use the event to drive publicity for other events planned around historic sites in England.

“This event was really good fun and drew in people from everywhere to take part in what was a brilliant evening,” Mark Williamson, site manager of Whitby Abbey for English Heritage, told Guinness. “We smashed the record seeing 1,369 Draculas coming through our doors and firmly placing Whitby as a must-see destination to visit.”

The monastery, overlooking the North Sea in North Yorkshire, was established in 657 AD on what is alleged to have been a former Roman settlement. The site of a lot of religious history during the Dark Ages, it was mostly destroyed by the Danes between 867 and 870 AD and later rebuilt to a larger scale in the 1220s, where it then thrived until being destroyed again by Henry VIII in 1540. Stoker drew some of his inspiration from, and features Whitby Abbey in his novel.