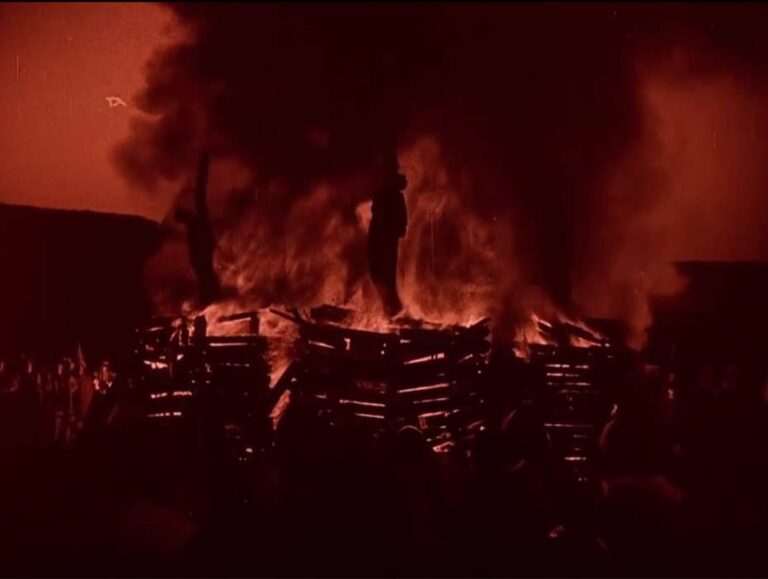 Silent docu-horror classic "Haxan: Witchcraft Through the Ages" turns 100 in May 2022 and remains a provocative, visually stunning and highly influential film.

There is nothing in film history quite like the experience of Haxan: Witchcraft Through the Ages.

More than just a movie, the edu-taining hybrid arthouse film guides viewers through seven horror vignettes that document the ignorance that terrorized people for centuries, and the millions murdered in the name of witchcraft.

Haxan‘s 100th anniversary on May 27 is an opportunity to relish the quality and insurmountable weight of the film.

First and foremost, the film is beautiful. Hands-down striking. Captured on film in 1922, the images continue to terrify and amaze. The film volleys between a beautiful red tint that represents the Devil, and sporadic episodes of blue tint that represent the nighttime. Mechanical contraptions that reimagine medieval interpretations of Hell serve as full-on sets, and — in recently available versions on disc and streaming — a wonderful orchestral soundtrack accompanies every scene along the way.

Incredibly offensive during its initial release, the Swedish silent film underwent major censorship in the U.S. and wasn’t shown at all in parts of Europe for scenes of torture, and depictions of the Devil. Now, Haxan is regarded internationally as an enduring piece of art, completely unique. Director Benjamin Christensen expertly guides viewers through the film with his deliberations, acute knowledge, and care. The film is divided into seven chapters, within each the director displays fictional representations of witchcraft, brought to life by his expertise and research.

In the first chapter, Christensen introduces witchcraft as a natural part of human naivety, guiding us through Egyptian notions of mysticism, and later moving on to Medieval ideas. We are shown drawings, maps, and take in these images of Hell as the music swells. The line between film and essay is blurred as Christensen educates and shocks with the imagery, creating his own type of dark-documentary.

Moving through what could be called a visual essay at a hypnotic pace. The scenes build in intensity, going from two-dimensional representations, to live-action. Chapter 2 follows a woman buying potions from a witch, and visitations from the devil wagging his tongue, seducing young women, dancing impishly.

The horror only grows, for the third chapter Christensen follows a witch’s trial from accusation, through the torture, and ending with her confession. A pandemic of false accusations sweeps through the towns as clergymen perpetuate the violence. Neighbors accuse each other in an attempt to save themselves, ultimately dooming them all.

The film documents how the men in power played a part in influencing the public’s anxieties, ultimately conjuring the Devil through fear alone. Making him real, and with him, witches, too.

In the ages of witchcraft — or rather in the days when witchcraft was punishable by incineration — misogyny and ignorance fueled violent hysteria. Christensen wraps his film up by comparing the witch trials of the medieval era to the 1920’s. In many more words, and a fetching arrangement of images, the director asks, have we changed? He ponders whether human instinct, and prejudice, are unavoidable traits.

As regression threatens our constitution, and women remain under attack, we are forced to ask ourselves the same question. Haxan reminds viewers in these times that ignorance is hell. In a completely imaginative way, Christensen horrifies us with the unnerving realities of the witch trials and goes further than magic — where there is power, there is corruption, and this is simply more terrifying than any mysticism. The reality is, women, men, and children were targeted at this time for being different. A mole on the chin, or parkinsons, was enough to be accused. And as we see in Haxan, an accusation was certain death.

In medieval times, and in our own, minorities are in danger. Prejudices persist, and to understand one another is still a challenge today. It has been a hundred years since Haxan was released, and centuries since the medieval ages, and of course we have changed. But as we all know, history repeats itself.

“Haxan: Witchcraft Through the Ages” is currently streaming on HBO Max, Amazon, YouTube and other services.