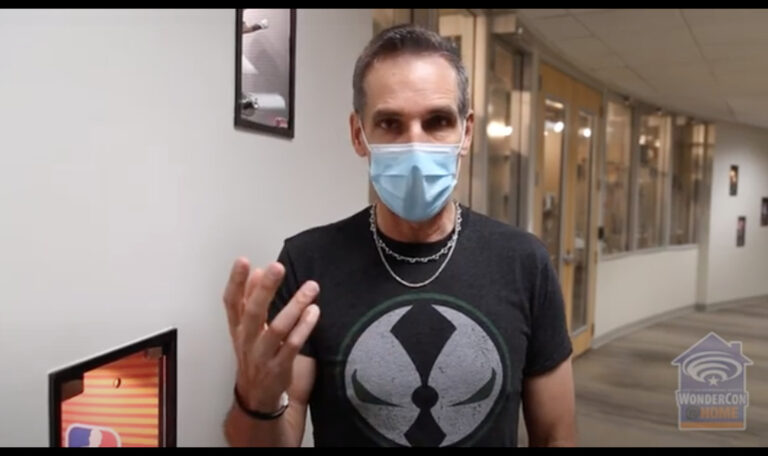 WonderCon Anaheim 2021: Halloween Every Night writers pulled together a round up of Friday's highlights. (Pictured) Author, artist and entrepreneur Todd McFarlane gave fans a look ahead for the Spawn universe.

The opening day of the all-virtual WonderCon 2021 in Anaheim offered fans a wide collection of artists, writers, and podcasters, as well as a few sneak peeks to fill their screen in a day of panels.

For those who missed it, all of the panels are available on the WonderCon site as well as WonderCon’s YouTube Channel, but here are some highlights.

Cryptids, Aliens and the Paranormal in Pop Culture

A big reason why Brandon Alvis was so drawn to the story that became his 2019 documentary Cemetery Park was the human element behind the paranormal activity he was investigating.

“Telling the truth is important,” Brandon said about the film.  He didn’t just want to tell another ghost story, but try to provide the context for why so many people reported paranormal activity around the Ventura, California park and former cemetery, and explore the emotions of surviving family members. Alvis said the park’s story also partly inspired one of his favorite paranormal movies, Poltergeist.

Zee Massari mentioned her investigation and research of Emmett Till for her paranormal podcast, Ghosts-n-Heauxs.  Massari described the research as tough but necessary to bring the tragic story to light for a wider audience.  All of the proceeds from the podcast this month will also be donated to the Emmett Till foundation The episode will be premiering on her podcast, Ghosts-n-Heauxs, in 2 weeks.

On the topic of pet peeves, Mustafa Gatallari mentioned his deep loathing for the Warren family and the subsequent movies made about them.  “I wouldn’t trust buying a mattress from these people.” All the panelists voiced their distaste for sensationalism in the paranormal world. “Not everything is a demon,” Massari said. The focus, they agreed, should be on empathy, after all, the ghosts were people first. — AG

“I’m asking the question, ‘Can another big shared universe happen’? I don’t know, I’m going to try. It’s going to take 20 years. As I announced to the retailers, I’m going to need a lot of help” said McFarlane.

McFarlane also reassured fans the new Spawn movie starring Jamie Foxx, is still very much happening. The script is still being worked on, with hopes of getting a studio attached this year. — MW


Dalen Spratt, Juwan Mass, and Marcus Harvey, aka the Ghost Brothers, talked about being the first African-American paranormal investigators on TV and looked ahead to their new show Ghost Brothers: Lights Out.

The three say they met while in college and share an adventurous mindset,

The new show will feature Spratt guiding in Mass and Harvey to investigate first when they don’t have prior knowledge of the haunting.

“I think what makes this concept really really dope is they don’t know what they’re getting themselves into,” Spratt said. “They don’t know any background story. They don’t know any history. They’ve never been to this building or this city before. So when they go into these places, they’re getting raw investigation and raw feedback. If they get anything in that opening sequence that matches a story that relates to what I know about the place it lets me know that there really is something else out there. I think from a technical standpoint, this show just adds another level of proving what’s out there.”

Ghost Brothers: Lights Out premieres April 17 on Discovery Plus.  — ML

A skeleton can be expected in the background when Greg Nicotero is on a video call. The executive producer and showrunner of the Shudder series, Creepshow, looked back at 2019’s first season and gave a peek ahead at season two. He also talked about determining which episodes to pair up when they air.

“It’s like wine-tasting, you know, you got to have the meal and you got to put the right wine, and I feel like having shows that have different tones to them pair better, you know, I like one that’s a little bit more light-hearted and one that’s got a little more heart to it. So that’s why I paired the first two episodes the way that I did,” Nicotero said.

During the casting of upcoming episode “Shapeshifters Anonymous”, they were a day  from shooting when they shut down due to COVID-19, Nicotero said.

“You know, there were a lot of people that didn’t want to travel and there were actors that I was excited to work with, and they were like ‘Man, we would love to but you know, we’re just a little nervous about getting it’,” Nicotero said. He also mentioned they were the first long-form show to resume production in Georgia.

Nicotero says he’s looking forward to fans seeing episodes like “The Right Snuff” which is an homage to The Andromeda Strain and 2001, another inspired by H. P. Lovecraft, and a George Romero tribute episode.

Supernatural in Spanish – A Conversation with Castiel

Mexican voice actor Alejandro Mayen, known for dubbing Peter Griffin on Family Guy and voicing other characters in Sesame Street, Power Rangers, and Malcolm in the Middle, discussed his most famous character, Castiel, a multilayered, celestial, and ever-changing being in the long-running series Supernatural.

Mayen acknowledged fans’ influence on keeping the character on the show and said what most charmed fans was Castiel’s fish out of water arc and how the angel discovered earthly things. Mayen agreed, and said “his process of learning on Earth is very endearing.”

But he disagreed with fan theories about Castiel being in love with Dean Winchester. Castiel’s final appearance in the show is when he professes his love to Dean before sacrificing himself one last time. Mayen called their dynamic a “strong relationship” and the goodbye “very emotive,” but said the last words “I felt it very fraternal,” despite plenty of references and jokes made over twelve seasons of appearances. — MC

Alexandra Christo, author of the novel City of Spells, Adalyn Grace, author of All the Tides of Fate, and Rose Szabo, author of What Big Teeth, all said they knew right away romance would go in.

Christo said she knew all her books would have an element of romance and that it’s difficult for her sometimes to not write the climatic kiss in the first chapter because she so desperately wants that moment for her characters. It’s important to allow the tension to build, she said.

Grace said she appreciates a romantic element to a story but it can be a tough balance at times between kissing and killing and finding the right moment to build up the tension. Too much of either element can turn it into a completely different genre.

While the beginning and middle of their stories are magical, they talked about how endings can round them out. Grace said she craves a gritty, realistic portrayal or in other words, “the down moments” of life, but she typically looks for a happy ending. The other women agreed, but also recognized the power in having a successful resolution even if it’s not traditionally a happy love ending, meaning the protagonist didn’t get what they originally wanted. They agreed that kind of storytelling is magical for portraying the way life can be – which is messy – and that is still good. — CJ

Oops … Science as a Problem and Solution

Sarah Gailey, the author of Echo Wife, a story about clones, marriage, identity and getting away with murder, explained that she made up every bit of the science behind it. Laura Lam, the author of Goldie Locks, a story about five women who travel to a different planet to save a dying earth said that although she didn’t know how to explain aspects of science and space, she was good at asking questions, which helped fill in all the blanks. She’d even ask real-life scientists questions like, “What irritates you about people who work in the lab?” just to help with character development.

Jonathan Messinger, author of the Caspian Series, explained that in his podcast, he gets called out by young kids if he doesn’t know, for instance, how gravity works. Therefore, he said, he’s imaginative, but he tries to make sure the basic science is correct.

Andy Weir, author of the novel and film The Martian, said he writes from a realistic, scientific standpoint but has no problem reading or enjoying material that is not based on scientific fact. Weir joked that he feels like he’s “cheating” by relying on real science to guide the conflict and resolution within a story, because he doesn’t have to rely as much on pure imagination.

Eric Glover and Arielle Jovellanos, authors of Black Star, a story about a scientist who crash-lands on another planet in a race to get the only spot on a shuttle back home said they didn’t heavily rely on technology in the story or science, but rather focused on the relationship dynamics between the characters.

Weir said he liked science to be both the problem and solution. When he investigates further into how something works, he discovers problems that he would have never imagined on his own and they lead to a whole new subplot. He recommended to go “stupidly” down the rabbit hole and let the physics point out where things would go bad for a character. Science is ultimately a marriage between problem and solution and in the realm of science fiction there are no limits to what is possible. — CJ

Into the VFX of Snowpiercer, Umbrella Academy, The Flight Attendant, and More!

While the film industry seemed to stand still for the past year, one sector of the industry kept pushing forward. Two special effects powerhouses, FuseFX and Folks VFX, worked continuously on projects, fulfilling pre-production and post-production responsibilities during the pandemic to deliver entertainment.

During their panel, the VFX supervisors discussed the effects of the pandemic. Jon Cowley, VFX supervisor for Snowpiercer, said that “for interoffice dynamics, it’s been really, really great because it just has sort of torn down borders. We are all the same size on the same screen doing the same thing.”

Johnny Fisk, head of Studio LA at FuseFx, said, “I think change is important, and I think it’s a big part of actual evolution.”

The panelists described the intricacies and workload to achieving world-building shows. Previs, 3D modeling, cinematography, painting, drawing and lighting design all combine to make a slugline on a page come to life. — MC