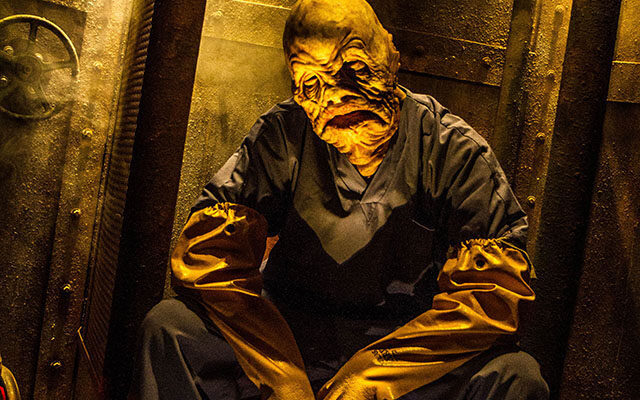 Q&A with Heather Luther, Co-Owner of the New 17th Door Haunt in Tustin

There’s been a lot of buzz surrounding The 17th Door, the new maze promising over 30 minutes of interactive scares, located at The Market Place in Tustin.

The maze tells the story of a young woman, Paula, who is going away to college with the notion of a fresh start. But things don’t go quite as planned at this school of terror.

The FAQ on The 17th Door’s website only adds to the intrigue.

A. Yes, each patron of The 17th Door will be required to sign the release of liability/waiver prior to entering the haunt.

Q. WILL THE ACTORS OR ANYTHING ELSE TOUCH US?

A. Yes, the actors may grab you and some things may fall on top of you. You may also get wet.”

Sounds like the beginning of an awesome time, doesn’t it?

Because our curiosity often gets the best of us, we just had to find out more. So we got one of the owners, Heather Luther (the co-owner is her husband, Robbie), to answer a few questions.

Here’s what she had to say:

Why is your haunt called The 17th Door?

It was a way to let the audience know that there are 17 separate experience rooms. In a way, it’s a challenge to see who can make it through the 17th door? Each room is more intense than the last.

Why did you decide to make this haunt about a university?

We wanted to explore something more “real.” The haunt is more about psychological terror than it is blood and gore. In brainstorming and putting all of our ideas together, the university came up in conversation and we realized that there were many scenes within a college that would work with all of our ideas. At that point, the story began to develop and we were able to build and come up with more innovative ideas.

What are your backgrounds?

My husband, Robbie, has started several businesses, the first being a car stereo shop where he designed and created custom, “show-quality” stereos. He currently has an automotive manufacturing business as well as a real estate business, with both come many resources. For the last 10 years, he talked about building an extreme haunted house. Robbie loves to put on an awesome show and can’t help but go over the top in everything he does. After college, I worked in mortgage for several years and then worked for my father, a McDonald’s owner-operator. I have always loved Halloween and Robbie has been encouraging me to start a business of my own. Over dinner one night, in August of 2014, it was decided that we would go into business together and that 2015 would be the year for the haunted house!

What have you learned during this process about creating a haunted attraction? Have you had any mentors along the way?

We discovered that building a high-caliber, pro-style haunt is as much work as we expected it would be! We have not had any mentors, for as I mentioned, Robbie has an extensive background in many things and was able to put everything he has learned into this project. Turns out the haunt community in SoCal is tightly knit – everyone seems to know everyone. We have met several of these community members and have been happy to receive positive feedback!

How does your attraction stand apart from others?

The 17th Door is not your typical walk-through maze. It is an immersive haunt with 17 different interactive rooms that all come together to form a 30+ minute “timed” experience. The haunt will also follow a strong storyline from start to finish, taking the guests on a journey with our main character, Paula. Guests will sign a waiver, some guests will be touched, some will get a bit wet, they will be alone at times and then there are the surprise effect[s] that I won’t mention. The haunt will be intense and many may scream the safe word “mercy,” but it is also designed to be fun.

Will the monster talent be interacting with a smaller number of guests at a time?

Groups of six to eight people will move through the haunt together, never running into the group in front of them.

You’re the new kids on the block – have you found other haunts welcoming? What’s been the response from the community at large?

It’s been awesome. The people in this haunt community, including the other haunt operators, have been genuinely welcoming and seem excited to have another haunt in Southern California. They want us to succeed because they, like us, have a passion for scaring people.

How would you categorize the type of scare tactics you are using in your attraction – bloody, psychological, shock, etc.?

We are including many elements, as we want to have something for everyone!