We're all suckers for some kind of superstition. National Defy Superstition Day, Sept. 13, is here to free our minds, if we let it. / Illustration by Jocelyn Andrade

If you’ve ever knocked on wood, superstitions are a part of your everyday life. How they have become so ingrained in us is not an easy question to answer.

Our weakness for superstition can be merely trivial, but debilitating in some. National Defy Superstition Day, Sept. 13, is here to free our minds, if we let it.

“We all have things that we believe. We all have our little rituals that make us comfortable,” says University of California at Irvine professor of psychological science Peter Ditto.

Ditto admits he’s guilty of it too.

“If you’re walking down the street and something goes between two people, like a lamp post or something, you say ‘bread and butter,’” Ditto says. “If you don’t, you’re going to fight. I would say that for years as a kid because I was taught that and it kinda comes naturally.”

He looks at superstition through a scientific lens. “Psychologists talk about these two kinds of thoughts that we have called system one and system two. System one is based on intuition … the reptilian brain, the simple instincts we as humans have.

“System two is a more rational system that only humans really have. It’s that logical part.” He believes people are of two minds, and superstitions are born from the conflict between the two thought processes.

Why do so many people fall victim to these superstitions? It seems that everyone holds at least some beliefs that can be deemed illogical.

“These sorts of psychological processes provide their own confirmation sometimes” he says, “Everyone is prone to this whether they think they are or not.”

Ditto says there are two fundamental principles of magic, and the first is the law of similarity, which involves people grouping things that appear similar together.

“It’s like a voodoo doll,” Ditto says. “It’s supposed to make somebody hurt because it looks like them”.

Similarly, people will throw darts at a picture of Hitler, but won’t if it’s someone they like. “Even if they go through with it, they tend to be less accurate,” Ditto notes. “They act as if two things that look the same are the same.”

Next is the law of contagion, where if two things come into contact, one keeps qualities from the other. Ditto connected this to the Shroud of Turin, claimed to be the burial cloth of Jesus. People believe it retains magic. “Even though they know it’s not true, they feel it,” Ditto says.

In the end it’s that feeling, perhaps of a lack of control, that allows superstitions to trap us.

A Sense of Control

“Superstitions grow out of an ancient, even primordial human sense of powerlessness and a corresponding need to propitiate and persuade greater powers,” says UC Irvine English professor Jane Lewis, who specializes in supernatural and gothic fiction.

Lewis admits to throwing salt over her shoulder if she spills it, never killing spiders, or knocking on wood and amending overly confident statements out of worry.

Lewis explains that superstitions, “Express our species’ awareness that — much as we would like to believe — we are not the most powerful force out there, whether you call that force nature, God, the gods, the universe, or energy.”

In Jordan Peele’s film Us, the use of rabbits and spiders drew on superstitions to enhance the atmosphere too. “Those creatures attract more superstitions than almost any others combined” Lewis asserted, “Maybe this is commentary on the way superstition can be a kind of zombified thought, uncritical and group-based.”

Superstitions in media remind people of the uncontrollable, malevolent, environment that surrounds them. “That suffocating sense of inevitability, or of knowing something bad will happen but not what it is. That’s the quintessential gothic vibe.” Lewis says. 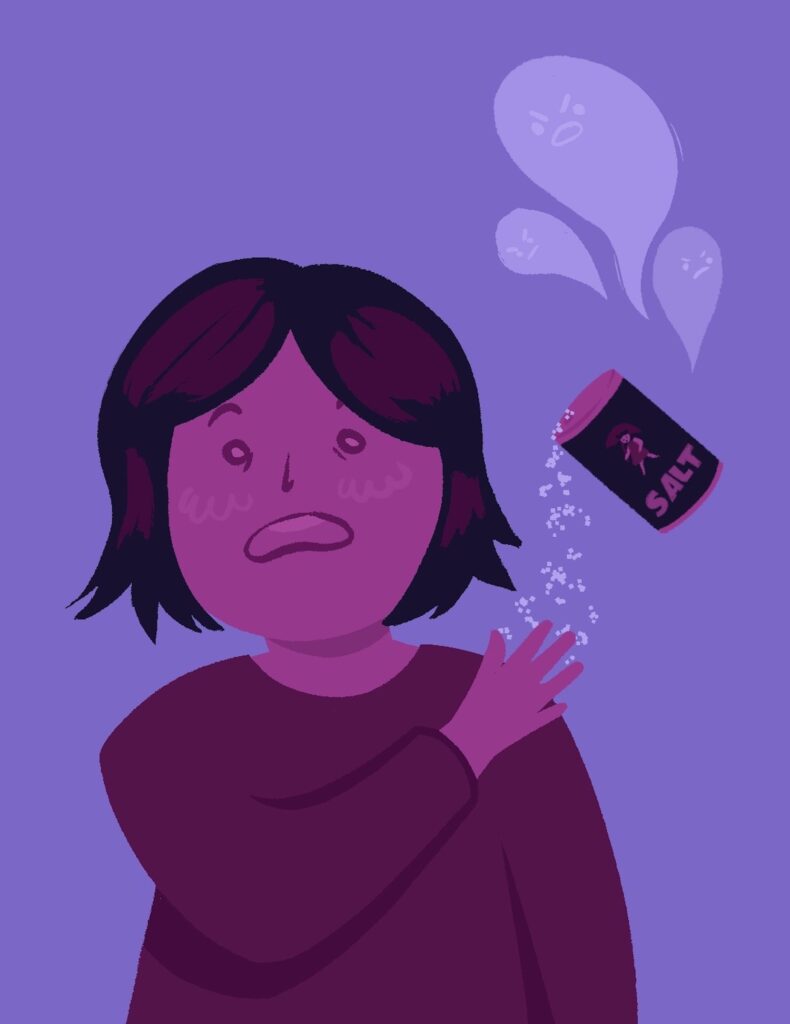 Why Some Superstitions Last

“Superstitions with the best chance of lasting are simple, and involve physical actions that embed them in the body, so they literally become part of the way people move around in the world” says Lewis. She links the more irrational superstitions with a need for an escape from rationality.

Sometimes however, they do have practical consequences.

Ditto says the emotional connection superstitions create with the believer is powerful enough to last even if the believer knows better.

“The rituals that baseball players have are interesting,” he says. “If you asked them if they really worked, they’d say ‘not really, but I do it because it makes me feel safe’. Emotionally it makes people feel better. It becomes a sense of control or an exercise of caution.” And control holds superstitions in place.

Defying superstitions, Lewis says, is recognizing them for what they are. They can cause compulsive behavior and hinder critical analysis and independent thought. “Research shows that superstitious people tend to have an external [point] of control vs. an internal one, and that leads to a much lesser sense of responsibility and personal power.”

Distinguishing what superstitions are harmful or helpful can be tricky. Ditto and Lewis connected beliefs surrounding the Coronavirus with harmful superstitions.

Ditto says studies show people thought a person leaving their house without a mask to buy drugs was more likely to get COVID than a person leaving to help an elderly neighbor, even though they were trapped in the same elevator with people.

“People confuse what deserves to be true with what really is true” he says. “They thought the drug addict deserved to get COVID and the nice neighbor did not, confusing morality with what is most likely to happen.” Consequently, intuitive beliefs can get people into trouble.

“There were all kinds of superstitions in the early days– injecting Clorox to prevent the coronavirus, for example — that probably did more harm than good.”

However, Ditto classifies the American Dream as a beneficial superstition. “Believing that you can make it, believing in your own power, or the American dream, is helpful to some degree.”

Lewis says superstitions are really a “double-edged sword.” They can make us feel like we are participating in a cosmic drama of good and evil. “Like everything else in human life, they can work for good or ill.”