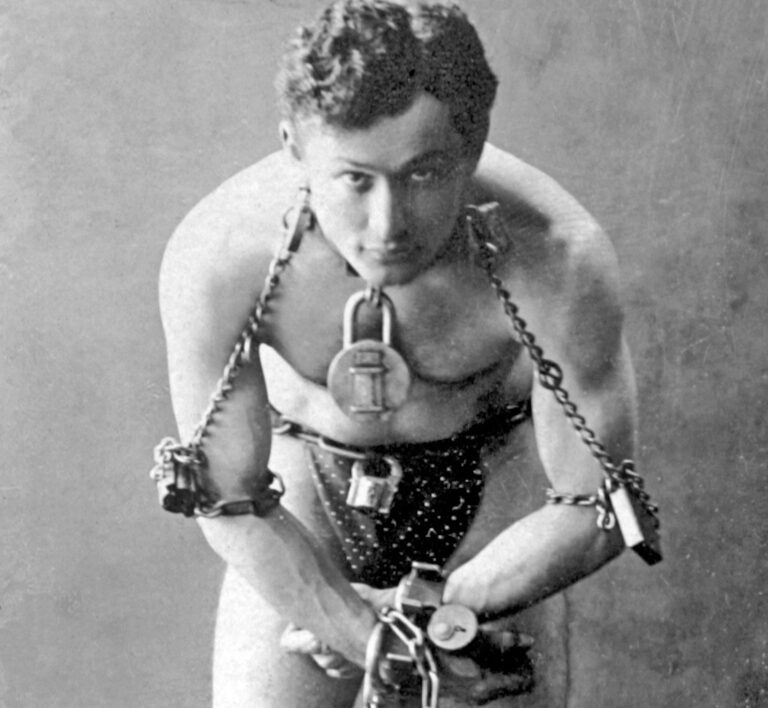 Magician Harry Houdini’s lasting influence and mystique is now on display to the public in the Muzeo Museum and Cultural Center’s new exhibit, Houdini Unchained: The Legacy of Harry Houdini.

The exhibit at the Anaheim Calif. Muzeo features first-edition books, personal letters, contracts, stage props, handcuffs, and the framed milk can from his famous 1908 escape. Visitors will see the private collection of author, famous real estate expert and avid collector Randall Bell, which includes previously un-exhibited materials. As guests walk in, they can see Houdini’s original Flower Cone Illusion, in which his assistant would turn into a bouquet of flowers and his flower table.

The gallery also contains Houdini’s Metamorphosis Trunk, a straitjacket used in the 1991 movie The Linguini Incident, and the Water Torture Cell featured in many film and TV appearances. Houdini’s Milk Can — possibly his best-known artifact — is also on display, an item originally brought from Houdini’s former New York home. Various handcuffs, seance clock, and other ephemera tell the story of Houdini’s rich life and career.

Harry Houdini, born Erik Weisz in 1874, rose to fame as an illusionist and escape artist in Vaudeville as well as various tours and stunts in Europe, including daring UK police to keep him locked in handcuffs. Houdini graduating to acts involving ropes hung from skyscrapers and underwater straitjackets, and eventually became one of the world’s highest-paid entertainers. He died of sepsis from a burst appendix in 1926.

The exhibit will run from October 8 to January 23 in Muzeo’s main gallery. Tickets are $7-$10.