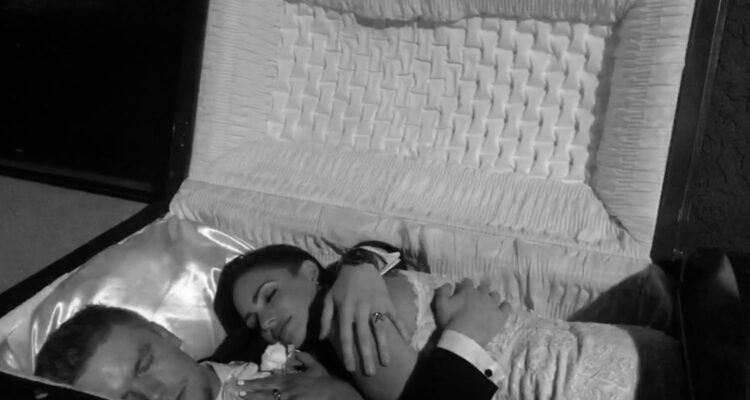 But “met” is too strong a word. It was more like “connected” … and not in a romantic way.

To say Rachel and Sean Adams have a unique love story is an understatement of the most extreme. And “extreme” definitely plays a role in the telling of the couple’s burgeoning relationship.

Sean and Rachel met in an ARG — for the uninitiated, that stands for alternate reality games — meaning things were often not as they seemed.

Rachel was a participant of extreme, immersive experience Santu Deliria, which Sean runs. So while they certainly “met” over their months together, it wasn’t like most meetings.

“The ARG lasted around nine months, although the intensive communication and in-person shows only made up a small part of that,” says Sean. “It was mostly done via audio/video livestreams, cryptic e-mails and Slack.”

But even as they spent months together in an intense in-between of reality, there was nothing romantic for them at the time.

“The experience itself didn’t really contribute to our relationship in a romantic way,” says Rachel. “It wasn’t until after the experience when we shared mutual respect of each other’s art and admiration.”

They finally met in “real life” in April 2018, at an event Rachel was having for her own immersive — albeit less intense — experience, The Count’s Den in Los Angeles.

“I invited a mutual friend of ours and he came along,” Rachel recalls. “From there, an instant connection was made, seeing each other out-of-game and getting to know each other in ‘real life.’”

Sean says that as the producer of an ARG, he tried to be careful about melding his two worlds.

“I felt it was very important to keep a distinction between the ARG and personal lives while it was running,” he says. “I’d go out of my way to not even risk bumping into audience members ‘out-of-character’! I’m very happy to have become friends with many of them since, and obviously getting to know Rachel was life-changing.”

Sean and Rachel are now married with two children — a 19-month-old daughter and a 9-year-old son from Rachel’s previous marriage. They have been married for two years and four months.

And they have quite the extreme love story to tell.

Halloween Every Night: What did you do before you started your businesses?

Sean Adams: I worked mostly as a video editor, but I always seemed to have some other “thing” which distracted me from it. Santu is basically a catch-all for whatever that “thing” might be this week!

Rachel Adams: I worked as a real estate agent, a cannabis sales consultant, owned and sold a makeup company, ran a production team for a digital signage company, and was head of sales for a production company.

HEN: Tell us about your businesses now.

SA: I run Santu Deliria, which began its life as a vaguely extreme, cheeky immersive horror experience, and is now an amorphous blob of a thing that aims to give people a wider array of unique experiences they might not find elsewhere.

RA: I own several horror-themed escape rooms under the banner Horror Escapes LA, a supernatural-themed immersive theater lounge called The Count’s Den, and a production company called HELA Productions. All are located in Los Angeles. 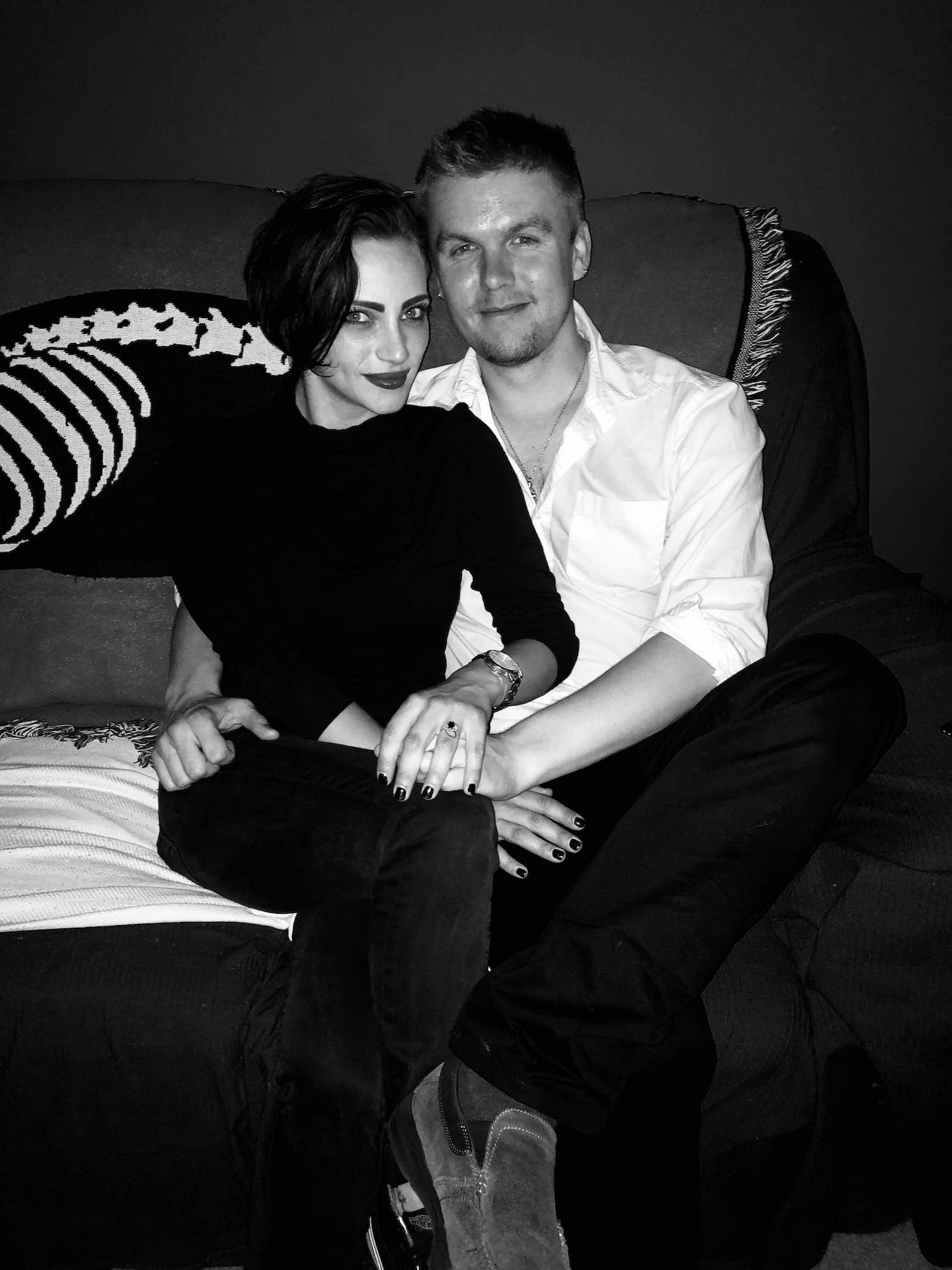 HEN: How did you meet?

SA: I stumbled into the world of “immersive theater” by mistake when Santu Deliria did its first show at Zombie Joe’s Underground Theatre, and Rachel became one of our most active audience members once we turned it into a long-form “alternate reality” experience. Throughout this time, I was faceless and anonymous. We didn’t meet in person until more than six months later when Rachel opened the doors of The Count’s Den, and we began a friendship based on our shared passion for creating these strange little worlds of our own.

RA: What he said.

HEN: At what point did you become interested in a relationship with each other?

SA: I always found Rachel an astonishingly impressive and good-natured person, so I had a long-standing platonic fondness for her before we even met. Once it appeared possible that this admiration could become both romantic and mutual, the transition was very easy indeed. She is utterly lovable!

RA: My admiration for Sean only grew as I got to know him more, and still does every day. Falling in love with him wasn’t a choice, it happened very suddenly and deeply, making a little home in my heart where there is laughter, shared interests and now the love of a little family.

HEN: Was it an awkward evolution into being in a relationship considering how you met?

SA: External circumstances aside, falling in love with Rachel flowed both naturally and unstoppably.

RA: In the small worlds we created and met, our own little world was created naturally where it’s even more “immersive.”

HEN: Considering you were in a theatrical/altered reality experience when you met, how did you know this was real?

SA: By the time we actually met, there was no longer any pretense of it being “immersive.” I think a lot of other people probably assumed it was all something of a hoax — two immersive creators who have both blurred the lines between fiction and reality suddenly falling headfirst into a very improbable relationship? It’s hard to blame them. I’d probably be suspicious as well! In the “immersive” realm, nothing is ever quite as real it seems, but in this case it just so happened to be far more real than it seemed.

RA: What he said. 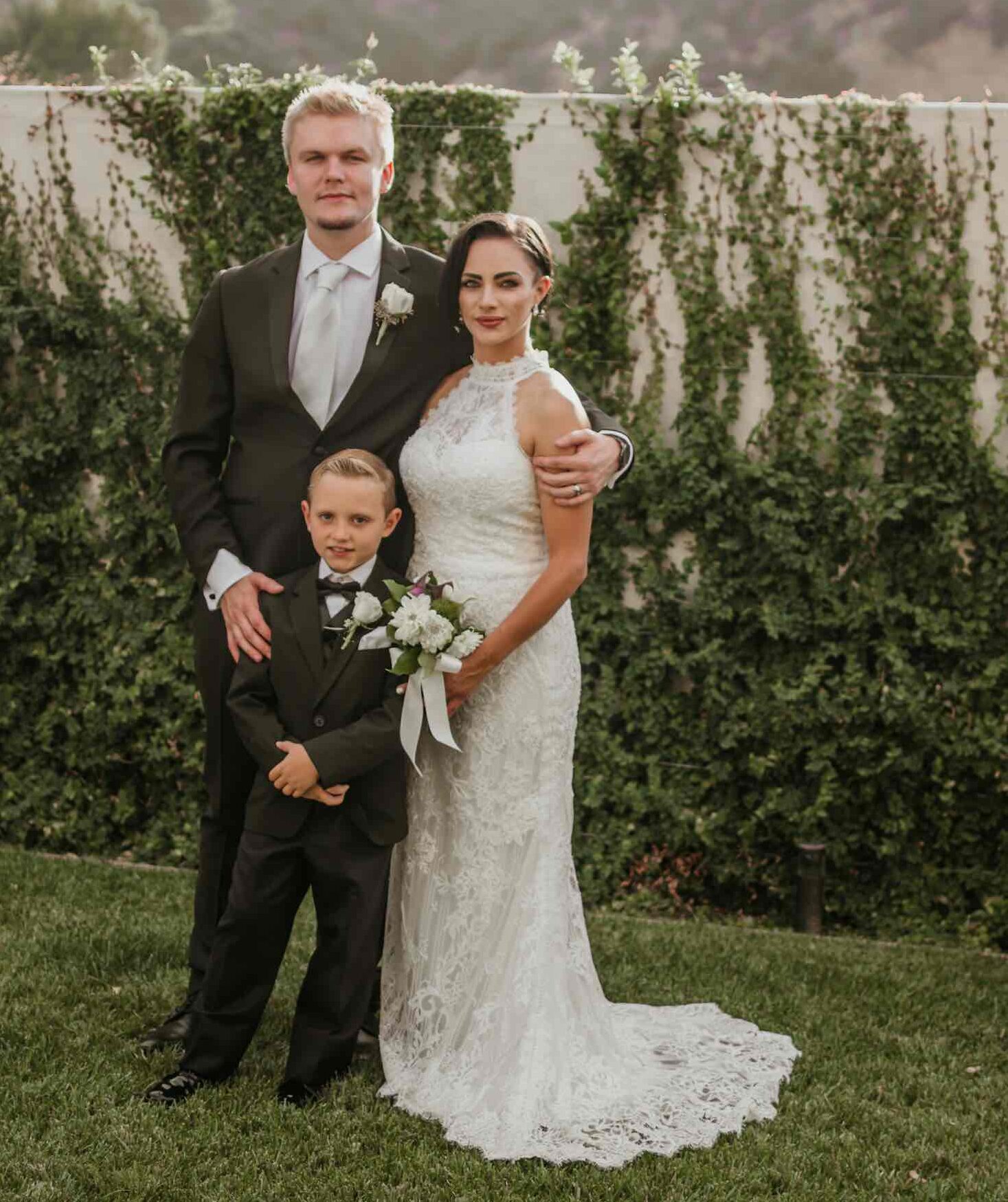 HEN: How long did you date before you were married? How long have you been married?

SA: I’m not sure we ever did “date,” really, although we probably spent far more time with each other than your average nascent relationship. Our “dating” was just living with each other, day in, day out. We jumped right in headfirst at the deep end! I think it’s something both Rachel and I have in common — when we’re into something, we’ll dive the whole way down. As a result, we’ve been married for longer than we knew each other beforehand.

HEN: When did you decide to have kids and how has that dynamic played into your horror-themed lifestyle?

SA: It’s no secret to anyone that having a child was among the last things anyone expected from me. I suppose doing so played into my penchant for horror, because it’s absolutely the scariest thing I’ve ever done! But, like all well-earned scares, I don’t regret it for a second.

RA: I love being a mom and knew I wanted another kid. Lucky for me, Sean agreed and trusted the process since I already did it once! I suppose that’s like holding the hand of someone that is walking in a haunted house in front of you. We thought the process of “trying to conceive” would take a while, yet our daughter jumped right into the world without delay!

HEN: When did you get into horror and why?

SA: I’ve been into horror since I can remember, in some form or another. Fear is a core emotion, like happiness, sadness or love, and I find myself wanting to chase all of those things at various points to plumb their depths.

RA: As a kid, I hated scary and threatening things. Movies with “bad guys,” natural disasters or the threat of “It” as I walked past a gutter really gave me anxiety. I felt that the real world was scarier than anything I could make up in my head, and I oddly turned to horror in order to lessen the real horror of the world. I realized that the things/stories I could make up in my head were a great distraction from the scary things happening around me — finding humor in my horror stories and getting lost in my own worlds that felt controlled and safe. 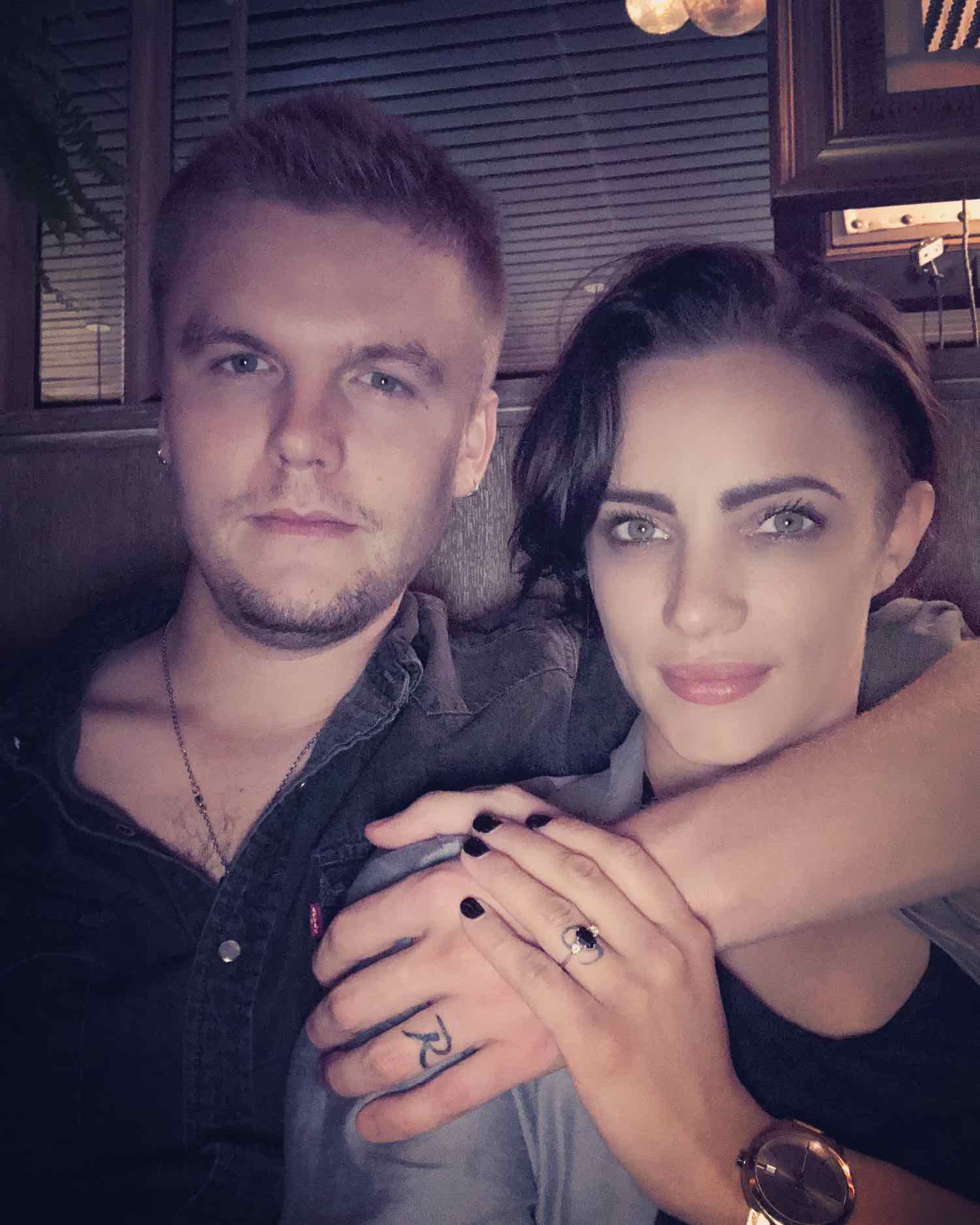 HEN: When and what attracted you to extreme, immersive experiences?

SA: I tend to be drawn to extremes in general. Whether it’s theater, music, film … or relationships, I suppose! I always want to know “the most” that something can be.

RA: I lived through some pretty traumatic and horror, real-life experiences in my life that have made me the strong and empowered person I am today. Being able to emotionally, mentally and physically push to my limits in a controlled and safe environment is exhilarating and cathartic.

HEN: How have your businesses been since the pandemic and other events over the past year?

SA: As it was when the pandemic started, Santu couldn’t do anything it intended to do. I thought about it a lot, and certainly fought the urge to “do something” just for the sake of doing it. I realized the best course of action would be to wait until the right time or idea presented itself. I took this forced hiatus as an opportunity to recalibrate my own relationship with Santu, without anyone watching.

RA: The escape rooms are on hold for the moment and our live theater shows have been delayed, yet it has been a great opportunity to create virtual/remote experiences for an audience. I feel that the pandemic really made me and the actors think “out of the box” creatively and we were able to do several virtual shows and work together remotely.