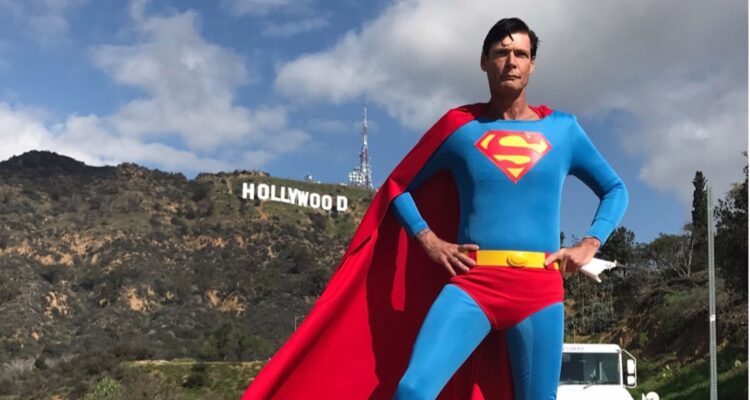 Christopher Dennis, also known as Hollywood Boulevard Superman, was buried Saturday, Dec. 7, thanks to the donations of friends and fans. He died Nov. 2 at the age of 52. Photo courtesy of Vladislav Kozlov.

The man known as Hollywood Boulevard Superman was laid to rest on Dec. 7.

Christopher Dennis cosplayed as Superman for more than 25 years and became part of the Hollywood experience, attracting tourists from all over the world.

Dennis died on November 2 at the age of 52 in Van Nuys, Calif. Once the news spread of his passing, a GoFundMe page was created by his friend and director, Vladislav Kozlov, to help his widow, Bonnie Finkenthal Dennis, with funeral expenses. He was buried at Forest Lawn Memorial Park in Hollywood Hills.

An anonymous individual generously covered the expenses and final wishes of Dennis, including to be buried in his Superman costume. The money that family, friends, and fans donated to the GoFundMe page will be used for smaller expenses, such as flowers, since the anonymous donor paid for most of the expenses.

Dennis spent the majority of his childhood in an orphanage and once he turned 18, he wanted to fulfill his dream of becoming an actor. His dream led him to Hollywood where he began his journey. He was able to live his dream, appearing in several episodes of the Jimmy Kimmel Show and a 30 Seconds to Mars video, but sadly also struggled with homelessness multiple times.

Since 2013, Kozlov worked with Dennis on a documentary on his life called American Superman. Family, friends, and fans are encouraged to share their photos and videos of Dennis on Instagram and Facebook by tagging him.