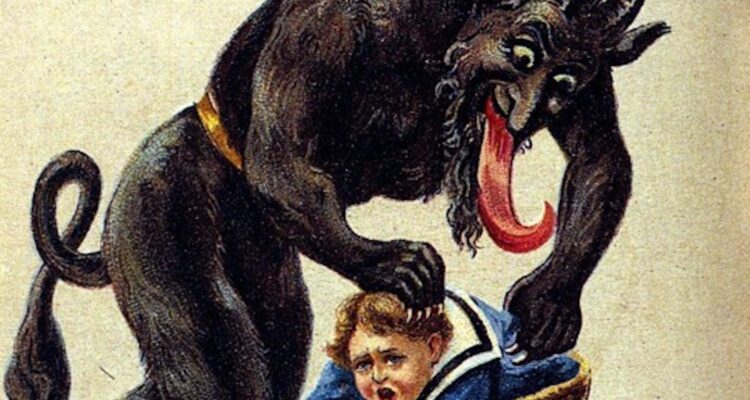 Krampus, depicted on a German greeting card, takes care of a bad little boy. Annual Krampusnacht celebrations have hopped the Atlantic after a few centuries in Europe.

Krampusnacht is upon us. And if you’ve been a bad little boy or girl this year, this is not the night for you.

You might think the goat-like demon character climbing the pop culture ladder the last decade is the creation of millennials dressed all in black, but you’d only be off by a few hundred years.

For centuries, Central and Eastern Europeans have included Krampus as part of Christmas celebrations right alongside St. Nick, as a sturdy and potentially terrifying parental threat for bad kids far more effective than any lump of coal. Depending on the time period or region of Europe, or for that matter, how dark the parents’ sense of humor was, ole Krampus might deliver you the aforementioned coal, or perhaps deliver you to Hell. Or the bottom of a cold Bavarian lake. Stuff that in your stocking.

“It’s being re-imagined somewhat by millennials and others in the US, but in its homeland of Austria and Bavaria, the Krampus has roots in a number of earlier folkloric characters dating to the 1100s,” says Al Ridenour, of Krampus Los Angeles and author of The Krampus and the Old, Dark Christmas: Roots and Rebirth of the Folkloric Devil.

“All of these would be threatening characters, bogeymen — or women because the oldest of these, Frau Perchta is actually a female — and beings said to punish children who misbehave.  The tradition’s a merger of folk Catholicism and pagan beliefs, and all of these characters make the rounds in the period between November 11, the old beginning of Winter, to Epiphany, January 6.  The Krampus is the creature who shows up with St. Nicholas right in the middle, Dec. 5, the eve of St. Nicholas.  The name ‘Krampus,’ and the figure as we know it, actually only dates to the late 1800s, and is continually being reinvented.”

The recent re-invention includes the merchandising of the creature, depicted in various forms on greeting cards, posters, t-shirts and film, TV and video games. So even though capitalism appears to have firmly embraced Krampus, the creature is still keeping kids up at night. In more ways than one.

“It’s lasted long because it not only gave parents a useful tool for encouraging good behavior in children, Ridenour says, “but dressing up as these creatures was a fun bit of amateur theater — a game — the older kids, teens, and young adults could play with younger siblings, cousins, and neighbors.  That game aspect, rather than the disciplinary purpose, obviously, is what keeps it alive today.”

Krampusnacht and Krampuslauf around the U.S.

Traditionally, Krampusnacht has been celebrated with some variation of a Krampus run, with performers in assorted Krampus costumes, often alongside St. Nicholas, visiting homes and businesses and giving children coal and birch branches and embibing offerings of schnapps along the way.

Seasonal plays — much like A Christmas Carol or The Nutcracker — featuring St. Nick and Krampus were also common. While some of these events remain across continental Europe, Krampus has become the star of Americanized celebrations as well.

“When I wrote my book in 2016, there were perhaps a couple dozen towns and cities that had some form of Krampus run, but now there are many more,” Ridenour says. He organizes one of the country’s largest annual events. Now in its seven year, it draws between 500-700 fans and spectators and stirs local artists and performers who participate.

The Krampus Ball features Rammstein cover band Krammpstein, who performs in fur and horns. Ridenour describes it as “less about recreating the European Krampuslauf or Krampus Run and more about a fun American spin on things. It’s not quite like anything else that happens here.”

While the Krampus Ball is sold out, the Krampus Run is still open to the public and will begin at 6 p.m. at The Alpine Village, 833 W Torrance Blvd, Torrance.

Some other events around the country include: