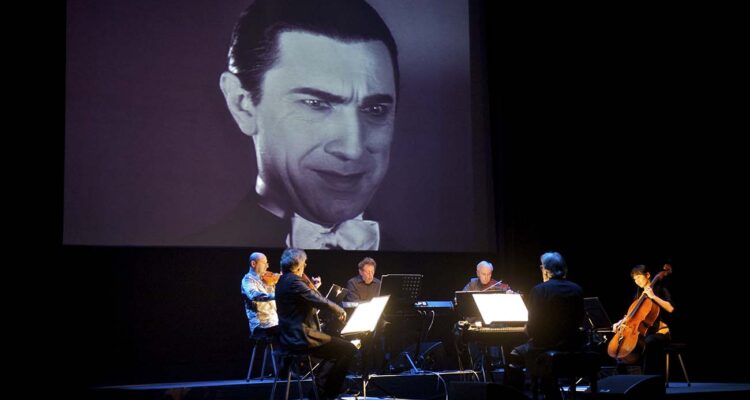 ‘Dracula’ Is Resurrected by Philip Glass and The Kronos Quartet

A special treat is coming to Orange County this Halloween season as the magnanimous count of the night returns to the silver screen, aided by musical talents of legendary composer and quartet.

Segerstrom Center for the Arts has joined with the Philharmonic Society in a special screening of Tod Browning’s Dracula, featuring a live performance of composer Philip Glass’ musical score by the world famous Kronos Quartet.

We had the opportunity to talk to David Harrington, founder of and violinist in Kronos.

Halloween Every Night: What is it about this score, and this performance, that adds so much to the film?

David Harrington: There is a sense that the music resonates with the voices and the action of the film, it almost reads the action. It comes to the point where it doesn’t feel like we’re playing music that is a part of the background or a kind of a filigree part; it feels like it’s absolutely essential.

HEN: What made you want to do a live score for Dracula?

DH: Growing up, seeing Dracula at various points in my life, it always seemed like it would be a fun thing to do, to add my own music to it. When Philip Glass mentioned the possibility of doing so, it seemed like the perfect assemblage of film and music and event; I didn’t even have to think about it. Glass’ score to Dracula, many think that it’s one of his greatest pieces, and Kronos has had so much fun performing the piece around the world.

HEN: What, in your opinion, is the purpose of the Kronos Quartet?

DH: Kronos is involved in some of the most recent music from around the world; our purpose is to make a body of work that feels like it reflects something of the world that we all share. There are things that are missing from the art form of the string quartet that Haydn started in 1750. We want audiences and performers to feel invigorated not only by the process of making music, but by the music itself.

The Quartet’s current endeavor is an educational project called Fifty for the Future: The Kronos Learning Repertoire. The project consists of 50 new musical compositions, complete with recordings, scores and performance notes, released free online for the purpose of educating young and developing musicians.

Dracula will be screened Oct. 28 at Segerstrom Hall in Costa Mesa. Tickets are available now.