‘Dracula’ Is Immortal At 90

Tod Browning's 1931 "Dracula" turns 90, and remains nothing less than the greatest vampire movie in cinema history. / GIF by Tran Tran.

Bela Lugosi radiates a piercing stare as the camera slowly moves toward him. His black-clad figure is hard to define. Not exactly human. Strangely bat like.

The camera continues to track forward. You are being pushed closer and closer to menace.

He is just in front of you in the discomforting silence, surrounded by an underground crypt that looks as cold, dirty, rotting and practically infinite as the grave itself.

This is our introduction to Count Dracula, one of the most singularly iconic villains in all of horror, in director Tod Browning’s Dracula. The character had lived before in the pages of Bram Stoker’s classic novel, as well as the stage, but here for the first time, we are stuck in his gaze. Locked in his eerie gravitational pull, feeling like a fly stuck in a spider’s web. We have entered a nightmare.

And we’re in the theater seat of an audience member in 1931.

The escapism Browning and his gifted, innovative cinematographer Karl Freund offered a Depression-weary audience from their very real troubles made the film a hit, but it lingered in pop culture because it offered a deeper, subconscious addressing of anxieties about sexuality, classism, and xenophobia. Similar to Stoker’s novel, it allowed the viewer to stare a changing world right in its glowing eyes, and ultimately defeat it.

But Universal’s Dracula goes even farther than the novel as the blueprint for vampires in popular culture. Much of it is generated by Lugosi’s performance. The accent, the gestures, and of course, the piercing stare.

The film is the first official screen version of Stoker’s tale, with the screenplay based on Hamilton Deane and John L. Balderston’s New York stage version, and other elements borrowed from F.W. Murnau’s silent classic Nosferatu, and Lugosi’s personal additions to the character.

Despite playing the role successfully on the stage, Lugosi wasn’t the first choice for the film. But now, of course, it’s become the definitive portrayal of the character. 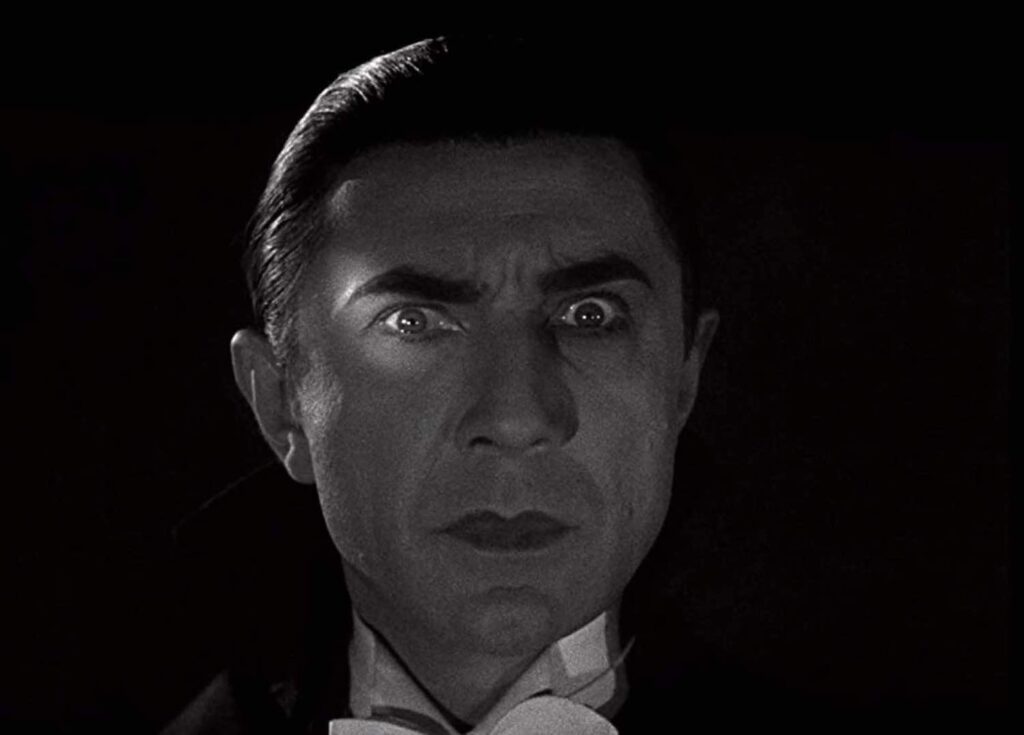 Vampires in literature and film typically represent sexual taboos. In this case, Dracula’s power over people in general and women specifically was a taunting of 1930s sexual mores, much like the original novel did of late Victorian England. People often died of STDs then and the risk of sexuality went far beyond pregnancy, but the threat that women’s sexuality posed, out of her husband’s or parents’ control, was tangible in an America that was struggling with change.

The idea that a Transylvania count — a foreigner — was coming in to steal the rich men’s women was a powerful metaphor for the stressed structure of society at the time and the scapegoats being generated. But 90 years later, the idea that something you can’t explain, or don’t quite understand, is messing up your life remains an effective one. That the explanation is supernatural and must be killed with a stake through the heart is the realm of horror. Few films accomplished it so effectively and originally as Dracula.

Over time, nervous studio bosses cut the film, leaving it incomplete for years. The addition of an overwrought and distracting score by Phillip Glass and the Kronos Quartet in 1998 further buried the film’s power, including the wonderful and creepy silences audiences originally heard — in lieu of a musical score — that give several scenes such edge.

In 1931, audiences hadn’t seem anything like Dracula. More vivid and provocative than any other American film at that point, it remains compelling largely because of Lugosi, who is something to watch. He was never this good on screen again. Typecast and relegated to mostly B movies, he would die a punchline, but is rightfully revered today for his one iconic role. One more than most actors get.

Browning’s career would crash soon after with the controversial Freaks and Freund would ascend to become an Oscar-winning cinematographer and respectable director in his own right, with Universal’s The Mummy and Mad Love, among others.

Over 90 years, filmmakers and actors have continued to be influenced by and directly copy Dracula. When the Library of Congress added it the National Film Registry in 2000, it ushered in a new era of appreciation for the film, with the American Film Institute adding it to its lists for top 100 Thrills, Heroes & Villains and Movie Quotes.

The film’s immediate success launched Universal’s run of classic horror in the 1930s and 1940s, including several sequels. But Dracula is the film that burned the idea of the vampire into American pop culture, and its style and swagger turned it into nothing less than the greatest vampire film in cinema history.