Creep L.A.’s Swan Song Is A Night In The Museum 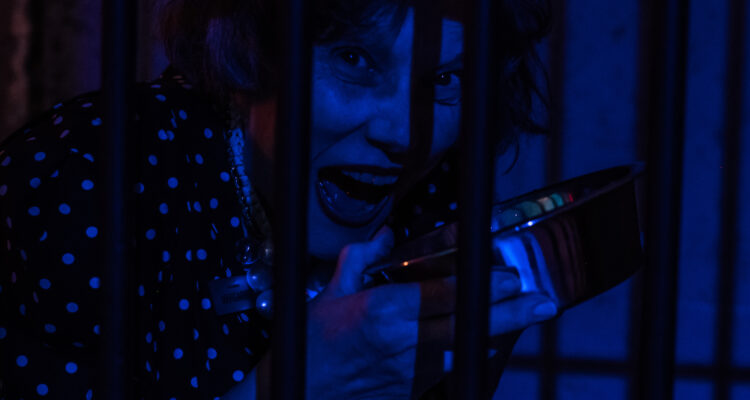 Art can be a killer. One man’s blood spatter is another’s deep meaning. And life or death itself can be in the eye of the beholder. Or at least it is tonight.

Creep L.A.’s latest — and perhaps last — provocative production is one disturbing evening at the art museum. The slow-burn weirdness and tension is both a salute to and satire of modern art, with visitors getting a Halloween immersive theater event jabbed right where their date night should be.

Justin Fix, one half of the creative duo behind Creep L.A. and its latest production, is feverishly flitting in and out of the performance area and around the crowd of Angelinos waiting to get in. Halloween Every Night caught up with him when the mayhem had subsided.

Halloween Every Night: Haus of Creep is a little different from your previous Creep LA show. What inspired you to go in this direction?

Justin Fix: We are always trying to reinvent and push the boundaries of storytelling. Going ‘open world’ — A.K.A. sandbox style in the industry — was something we always wanted to try. This being the final year of Creep LA, we thought it would be a great tribute to all our past seasons.

HEN: There’s a certain amount of organized chaos going on throughout the experience. How do you manage this balance?

JF: We wanted the guest to feel torn. Have two large conflicting scenes occur at the same time – allowing guests to only get fragments of the story, so they would have to piece together the drama that unfolded with friends and strangers. It may ‘appear’ as chaos, but every actor is on a track with a specific storyline full of secrets, insight and drama.

HEN: Are you seeing an evolution of the Haus of Creep already throughout the run? Is every show different?

JF: With any live production, it just continues to get stronger & smoother. With over 2,000 people though our doors in just the first few weeks, we face some very challenging and eye-opening moments with guests. Those instances allow the cast and crew to work smarter and adapt in the room. The show has truly found a life of its own.

HEN: Now that you’ve run Creep LA for several years, are you able to anticipate audience reaction to the actors better? And how does that impact how you direct the show?

JF: The past four years have allowed us to get to this point. We have been trying to evolve from a seasonal business and break out of the Halloween/horror genre. We are grateful for our audiences who have supported us along the way. We really hope this is just the beginning.

HEN: How do you gauge audience response?

JF: This year’s production of Haus of Creep has seen the most positive and negative response from audience members from our shows. The current production puts a lot of responsibility on our audiences. You have to get involved and play. I always say ‘Players are gonna play, haters are gonna hate, but I guess that’s A-R-T.’

HEN: How many actors are part of this year’s show?

JF: An ensemble cast of 24. Almost a two-to-one ratio, audience to actor.

HEN: Did the different formatting require any adjustments by the actors or different kinds of actors?

JF: Almost 50 percent of our actors are new to us this season. We are always trying to push and introduce talent toward this form of entertainment. It definitely takes work and is a whole new way to approach performance. Very grateful to have assembled a company of over 50 actors who have become specialists of the immersive community.

HEN: How do you direct actors in this kind of immersive theater?

JF: We were in rehearsals for nearly five week prior and perform 16 shows a week. It certainly takes skill, energy, talent and dedication. We conduct workshops with the cast on improv, guest management, scare techniques, etc. Performance is number one to this company.

HEN: Since you are part of the show, is it easier for you to direct and make in-the-moment decisions?

JF: The show is pretty much set. I actually only joined the cast two days before opening. It’s been a pleasure to direct and play with this talented group of people.

HEN: Is there a lot of improvisation?

JF: The script is actually more than 60 pages. Roughly 30 percent of the show is improv, everything else is scripted and tracked.

HEN: What was your ultimate goal with Haus of Creep? To place people in a world rather than guide them?

JF: Our goal was to create a surreal world that people could discover, escape, explore and play in. Haus of Creep is an adult playground that has something for everyone, it’s just up to you to find it.