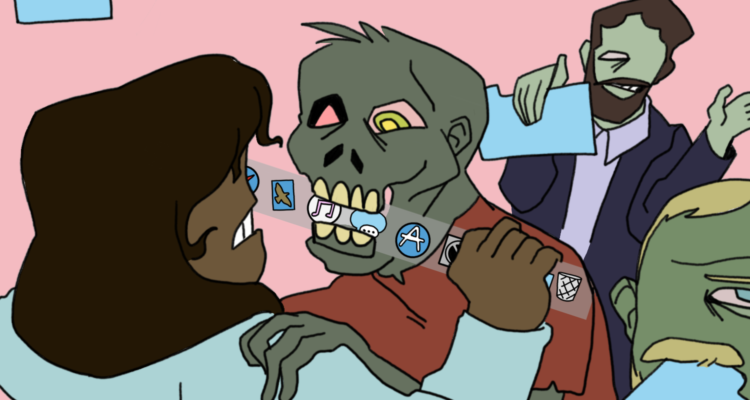 "Walking Dead," "Fear the Walking Dead" and new spinoff "World Beyond" will all shamble in October 2020, a virtual Comic-Con panel announced. / Illustration by Scarlett Kirn.

October will be dead again, according to the Comic-Con@Home panels at Comic-Con 2020.

The long-awaited Walking Dead season 10 finale will air at 9 p.m. Oct. 4 and be followed by the premiere of the new spinoff The Walking Dead: World Beyond. A new Talking Dead episode will wrap up the evening.

The announcements came during a half-day of panels dedicated to the TV franchise based on Robert Kirkman’s popular comic. Kirkman himself, also sat for an online chat.

The franchise’s first spinoff show, Fear the Walking Dead, will return Oct. 11. The show this season will take on more of an anthology approach, featuring mostly episodes focused around individual characters or small groups.

Among other points revealed during the panels:

Domingo announced his series on Youtube.com/TheWalkingDead and AMC.com, Bottomless Brunch at Colman’s, has been picked up for six more episodes.  The 20-minute video-chat-based show, features Domingo at his L.A home.  The series returns Sunday, August 23.

Walking Dead showrunner Angela Kang announced season 10 will have six extra episodes following the finale and will air in early 2021. Kang also said the show’s 11th season will not air in its regular fall-to-spring timeslot, due to COVID.