Can You Catch The Ripper? 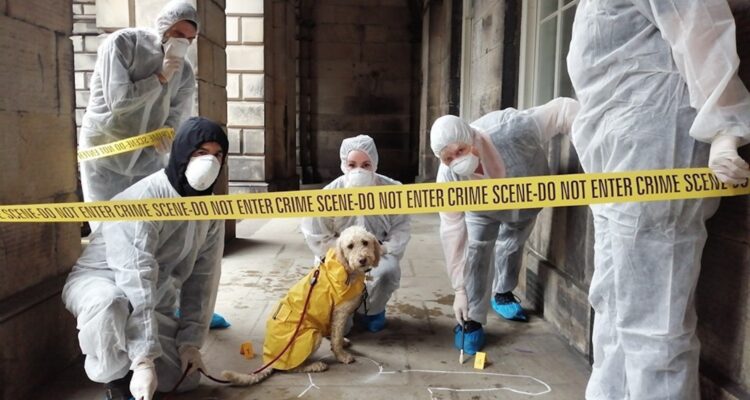 A team in Edinburgh, Scotland works the clues at CluedUpp Games' The Ripper. Dozens of Covid-Safe events in the U.S. are scheduled for 2021. / Photo courtesy of CluedUpp Games.

Wear your best costume. Put on your most creative makeup. Gather the family, and bring the dog. You’re going to need a magnifying glass to find the hardest-to-find clues in order to solve the mystery and catch the Ripper.

The Ripper is the latest from CluedUpp Games. They call it part scavenger hunt, part virtual murder mystery, and part adventure game.

Escape rooms and board games were hot before the pandemic but since March 2020 have been struggling to maintain their connection with their audience. Certain businesses, however, almost seemed designed with current events in mind.

“Everyone wants to go outside and enjoy themselves, and our game is a relatively safe, COVID-safe game,” Nicole Read, CluedUpp’s digital marketing executive, said.

Based in the United Kingdom, CluedUpp was founded in December 2016 by Tref Griffiths when he was looking for a new game that would interest people.

The Ripper events are loosely inspired by Jack the Ripper, but Read said the games are fictional.

“We like to call ourselves kind of like a mix between Pokémon GO and Clue,” Read said.

Griffiths had a passion for murder mystery and saw a gap in the market to create “the world’s first virtual murder mystery game” similar to Pokémon GO.

Read said they’ve hosted over 500,000 games a year around the world since they’ve started. Griffiths brought the game to the U.S. around 2017 after he saw how popular the game was in the U.K.

CluedUpp recently had a killer turnout for their event in Irvine, California. The event sold 323 tickets for six-player teams, potentially having a total of 1,938 players.

Read said a lot of events get sold out quickly because of advertising, and they encourage planning and bringing a team together in advance. Their next event in Santa Clarita, California, is already sold out and the nearby Long Beach event will soon follow.

“We’ve been inspired by all sorts of things. So previous games include The Latest Krayz, we’ve had a Sneaky Finders, which you can gather where that’s come from, we’ve had the Witchcraft & Wizardry, so they’re all kind of loosely inspired by things,” Read said.

All CluedUpp events are family-friendly. “There’s not really a specific age range, but we kind of just say, you know, discretion is advised because there might be some themes of, I mean there’s nothing really like violent, but it’s just might be kind of just more adult themes,” Read said, adding that everyone, young or old, is welcome but to be wary.

The way the game is set up, everything takes place outdoors. People beyond their teams aren’t getting too close, and participants can move at their own pace without rush. Socially distancing was not something that CluedUpp had to implement after the pandemic hit. However, they will still send pre-game emails detailing COVID-19 guidelines.

“We don’t encourage other teams to interact so you’re not interacting with anybody outside your household,” Read said. If people are still nervous about participating, she says the company’s customer service is available to answer questions.

Read said that participants spend hundreds on costumes. CluedUpp encourages dressing for the events, with prizes given to the best-costumed team. Participants often take photos and videos, and there’s also a prize for best team picture.

“We don’t actually have specific events that are themed for Halloween, but I guess as a company, a lot of our events are themed around Halloween,” Read said, adding that she’s already planning a campaign for bringing the excitement of Halloween on social media.

Tickets in the U.S. are $52 per team, with at least 170 events scheduled this year, including Tampa, Buffalo, Detroit, Honolulu, Kansas City, Pittsburgh, and Phoenix. Go to the CluedUpp website to find the closest event.