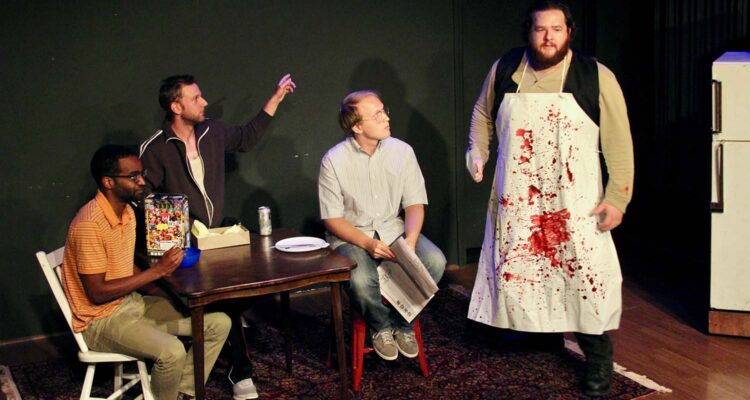 Sweet and spicy – horror and comedy. For whatever reason, opposites attract, merge and form something greater than the sum of its parts.

Such is the case with Bloody Awful, a two-part, horror-comedy show written by Leland Frankel and directed by MJ Watz, premiering at Asylum at the Stephanie Feury Studio Theatre in Hollywood. The show consists of “The Callback,” featuring an aspiring actress willing to do whatever it takes to get the part, and “Slaughterhouse,” a darkly humorous romance about a boy, a girl and the boy’s nightmarishly abnormal neighbors.

We had the opportunity to talk to Frankel about his show, and about the inspiration behind it:

HalloweenEveryNight: Why do you think horror and comedy often blend so well together?

Leland Frankel: I think that any one thing is always going to feel bland – straight comedy or straight drama or straight horror sort of numbs an audience. Life is a collection of wildly divergent emotions, usually one right after the other, no matter what the circumstances are.

Art should reflect that – and horror and comedy are a perfect fit because they’re the most extreme takes on opposing genres. The contrast improves both parts.

HEN: Where did you get your inspiration for these stories?

LF: I’ve been involved in theater since I was 16, and through college and grad school most of my friends have been actors or performers. I’m not saying it’s easy to make it as a writer, but I do not envy the lives of actors: The constant pressure to present themselves as whatever a casting director needs for the part is what inspired “The Callback.” I wanted to capture the way I imagined so much shape-shifting could warp a human soul, and the toxic power struggle between producers and performers, which can often take on a sexist bent. I mean, have you seen some of these casting notices out there? Ridiculous.

“Slaughterhouse” occurred to me after I had been living a few months in my very first apartment with some of my closest friends. I’d been meaning to write a classic door-slamming farce for a while, and after a couple of big fights brought us to each other’s throats, I had this realization that there must be people out there who live with serial killers and don’t even know it – or do, but have learned to cope. So this was my attempt to write a Noises Off-esque farce, but with an extremely dark twist.

HEN: What do you want people to walk away with after they see Bloody Awful?

LF: I want people to be entertained. That feels like a bad thing to say sometimes, but I view theater first and foremost as a mode of entertainment. I want people to feel those big feelings of shock and disgust and amusement and maybe even turn them on a bit.

But I also specifically want audiences to think about show business, especially with “The Callback.” I want them to think about how our culture celebrates people pushing themselves to and past the limit, no matter how much it hurts.

And of course, I want people to laugh until they cry.