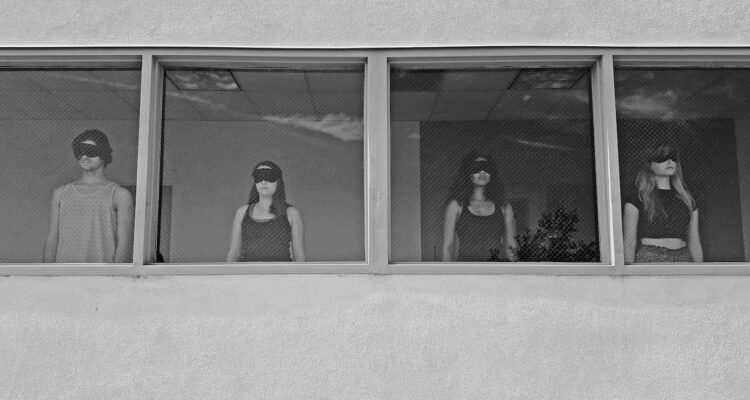 "Incarnation," which opens Aug. 23, is an approximately 20-minute sensory-based experience designed for one guest at a time. "Touch," which opens Sept. 27, is a longer, more story-driven immersive experience for 10 guests per performance. / Courtesy of Trailblazer Productions

All physical human touch is regulated by the government. Couples must schedule “intimacy sessions” and all unapproved physical contact is a capital crime.

“Both shows are stand-alone events so whether you attend one, or both, you will get a unique experience regardless of how you decide to come experience the Touch world,” said Ben Cox, director and producer for both events.

Cox took some time to answer our questions about what audiences can expect from these two new immersive events.

HalloweenEveryNight: Describe some of your previous works.

Ben Cox: I have been producing and directing theater in Los Angeles since 2006 and have worked in a variety of styles and genres. Previous works include The Seven, a collection of original one-act plays, each containing one of the “seven deadly sins” as its theme. I also developed and directed Screamers, an original full-length play inspired by the exploration of “urban legends” from various cultures. Over the last few years I have been drawn more and more to experimental, avant-garde and immersive work. I love immersive experiences and am thrilled to see the variety of productions that have been popping up over the past few years. There is something very immediate and tactile about them and it felt like the perfect and frankly, necessary, way to tell this story. People crave experiences that are tangible and sensorial and in an age where technology has created a side-effect of disconnection, experiencing something that brings back focus to all of our senses can have a very powerful effect.

HEN: What inspired you to produce Incarnation/Touch?

BC: The idea for this experience was inspired by many of the issues currently facing society. I think the fear and paranoia that seemingly continues to build is affecting many aspects of humanity. The idea that one day the environment gets so volatile that extreme measures are implemented as a form of control is frightfully relevant. In developing this project and building the world, many different concepts were explored; everything from the impact of “social credit scores” to the rise in robotics and how we interact with technology, to the idea that in the future, full removal of individual senses could be used as a form of capital punishment. I wanted to explore how we as humans define our identity, as well as how we develop and maintain relationships in an environment that is dictated by fear.

HEN: How do your immersive experiences compare and contrast with others?

BC: I enjoy all different kinds of immersive experiences but I am particularly a fan of the work JFI Productions does with the Creep series of shows and I also have been impressed with the work done by the Alone experience. I like immersives that focus on the psychological aspect and creating tone and mood.

Touch and Incarnation are uniquely different from each other tonally, despite some overlap and being set in the same thematic universe. Incarnation is much more directed towards those who want a visceral and potent experience and want to experience their senses being activated in a very unique way within an immersive theater performance. Fans of stuff like Alone or Creep will probably be able to appreciate this type of experience. Touch is a show that changes throughout the night. It’s part secret party, part traditional theater, part immersive experience. In creating both of these shows, I really wanted to play with conventions of both traditional and immersive theater and create something that would be unique and unlike anything you’ve experienced before.

HEN: Do you consider this a horror experience?

BC: Thematically, yes! But this is not an “extreme haunt” or traditional horror event. All touch and contact in these productions will be gentle and I hope that in a way it is something of a therapeutic experience. To be fair, Incarnation is probably the more “intense” event. Ultimately, we aim to create a unique experience in both Touch and Incarnation that is enjoyable for fans of immersive-based events (horror and otherwise), as well as those who have little to no experience with immersive events.

HEN: If participants are mostly blindfolded, how is the story moved forward?

BC: During Touch, guests will only be blindfolded for a small portion of the evening. During Incarnation, they will be blindfolded for well over half the experience. Incarnation has a linear through-line but it is definitely interactive and requires participation. Think of it as a unique hybrid of therapy spa/interactive radio drama. I don’t know how else to describe it other than to just experience it. Sight is our dominant sense and when it is taken away it forces you to experience things in a way you don’t necessarily focus on most of the time. Everything else becomes heightened.

HEN: How many actors are involved and what are their backgrounds?

BC: We have 13 performers each evening in Touch and six per night in Incarnation. We have a talented and diverse cast from a variety of performing backgrounds in film, traditional theater and immersive performance. Several of our cast I have known for a number of years and have worked with on previous projects and several are joining us for the first time. It’s a great and passionate group.

HEN: What do you hope to accomplish through these experiences?

BC: With both shows, I want people to walk out not just being entertained for the evening, but actually asking questions of themselves. I want to make something that inspires audiences to realize that we as humans have power and choice and should make decisions that allow us to create lives for ourselves that are actually fulfilling and beneficial. In this day and age, it can be very easy for people to get stuck in a rut or routine or just feel like they’ve become a cog in the machine. To be reminded that ultimately, we have choice in the way we live our lives, can be very empowering.