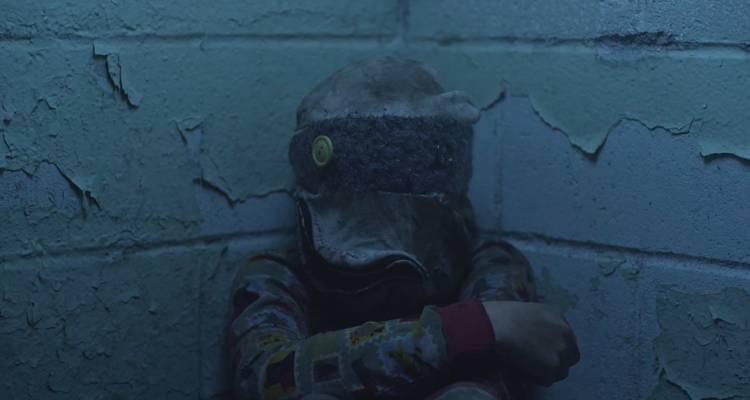 The Slasher Lives On In Iceland’s ‘Child Eater’

From all over the globe, filmmakers continue to pay homage to those masked and bloody murderers who inspired them.

Child Eater is an Icelandic horror film that came out in 2016. Written and directed by Erlingur Thoroddsen, the film details the night when babysitter Helen (Cait Bliss) discovers that the bogeyman haunting young Lucas (Colin Critchley) is dangerously real.

“Ever since I was young, I’ve been obsessed with horror, even before I was allowed to watch it,” says Thoroddsen. “I would browse the covers of the horror movies in my local video store. I couldn’t rent them, so I made up my own stories.

“I remember, particularly, I was obsessed with Freddy Krueger. I would tell my friends stories about Freddy. When I was writing Child Eater, I was thinking about A Nightmare on Elm Street. After watching it, I became even more obsessed.”

Thoroddsen’s obsession shows in both the story and the visuals of the film. Nighttime is not simply dark but pitch black, as Thoroddsen puts that classic chiaroscuro lighting to great effect. Shadows are both friend and foe in this film, serving as hiding place for our heroes, and ambush spot for the truly disturbing villain.

“I began by looking at paintings by Francis Bacon for inspiration,” says Thoroddsen. “I had these images of him, cloaked in shadows, his pale face appearing from the darkness; images from my childhood that I’d kept in my head.”

As for his transition from short film to feature, Thoroddsen found the experience challenging, but rewarding. “Everything takes longer. It takes more people, more days of shooting. Making a short film is kind of like running a sprint; a feature is like running a marathon. You’ve got to maintain that intensity and focus for however long you’re shooting, which could be weeks, or months.

“We got a lot of the same team who did the short to come back and do the feature,” he continues, as he describes the benefits that feature length offered him and his team. “The production designers were allowed to show off more, building the tunnels and the forest sets. The makeup artist certainly had more fun with the gore.

“More than anything, we hoped to entertain. We wanted to do something that was a mixture of disturbing and exciting, like a roller-coaster.”

Thoroddsen has another feature touring the festival circuit: Rökkur, or Rift. Shot in Iceland, the film is more thriller than horror, but promises some entertaining shocks.

Child Eater is available on digital On Demand.