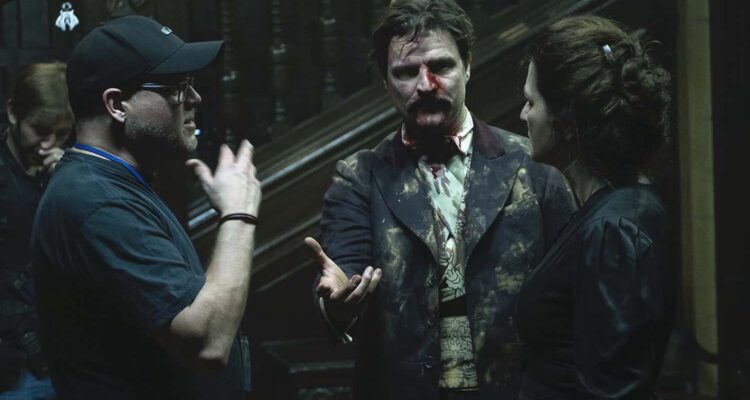 Oktoberfest: Beer and Blood is not a documentary about sudsy beer mugs, bratwurst and pretzels. The darkly gritty and visceral drama about the early years of Germany’s biggest cultural event is Netflix’s fun new import.

A series built for long winter pandemic binge viewing, it is Scorsese meets biergarten for American viewers. Yet touches of horror and westerns also spill over through the sumptuous visuals. An artful and complicated tale that yes, is about beer, but is more about obsession.

Oktoberfest follows brewer and show master Curt Prank and is based on real-life showman Georg Lang, who changed the traditions and the scene in Munich in the early 1900s. Prank isn’t lovable, but is eminently watchable. Combined with attention to period detail and art, a strange, darkly violent fantasy propels by.

Halloween Every Night talked to director Hannu Salonen and cinematographer Felix Cramer about their series and their own blood and toil they poured into its creation.

Halloween Every Night: Maybe the best thing about this series — from an American point of view — is that it’s about a completely fresh subject. I don’t think I’ve ever seen anything about Oktoberfest. A lot of Americans LOVE Oktoberfest, but we don’t make movies or TV shows out of it. Tell me how this series came about.

Hannu Salonen: The thing is, Oktoberfest itself is just a huge event, but it’s nothing but a setting. It needed an inciting incident and it could have been something we made up. In this case, however, we found a wonderful sort of “hushed-up” character named Georg Lang.  He was the first to conquer the Oktoberfest as an outsider, which was not allowed. He managed to put on this huge beer tent for thousands of people and changed the whole character of the festivity forever. Before that, it more or less used to consist of a bunch of small beer huts with a lonely fiddler and a piano man in the corner. Mr. Lang, who was called “The Crocodile George” because of his crocodile skin boots, was the man we built the story on. He was the real Show Master and he knew how to win over the masses – he even had a song be composed – nowadays the most famous drinking song on Oktoberfest!

HEN: The series has a wonderful look to it. Kind of gothic. Kind of giallo. Lots of aerial shots. I like the juxtaposition of the model with the real location. Can you explain what you were going after?

Felix Cramer: We wanted to be as modern as possible, avoiding this stereotypic kind of historic look you see in many shows. Our visual approach for Beer & Blood orients more on German art and music than existing period movies. Our imagery is luscious, colorful and full of life and never fusty or drab. Oktoberfest contains different settings and characters and is a breathtaking trip through their souls. All characters are complex, not only good or bad, and they all reflect different shades of human flaws. Our aim was to show these facets and to strength the emotional impact by using expressive camerawork, lighting and colors.

Using aerial shots was another important element. We wanted to show the magnitude of the Oktoberfest field, settled in the middle of Munich city. This folks festival is an important character of its own. It is a diverse world, where joy and sorrow are tightly intertwined. We often started with very wide shots and moved into the crowd of people ending close at one of our main characters. This camera movement overlays the vibrant Oktoberfest feeling on the scenes.

HS: For me Oktoberfest is about the real depth, not about history, not about 1900, but about something I’d call ancient. Biblical. Mythical. The whole thing has to rise above a mere historical series. It has to become a real drama and relevant for today’s people. It has to become universal. A bit of Shakespeare should always resonate underneath – beside the composer Richard Wagner, with his very german motives. Some say this whole thing is a soap – in its core that might be right. At the same time it should look huge. It should give you the feeling that you’d get as a visitor of Oktoberfest, that’s the minimum. It should go way deeper into the real stuff, that’s why “Beer & Blood” actually is the right title. Not just mere theoretical documentation of the history, but more of a box fight in a cage – you should feel the pain and the joy.

HEN: The series has touches of the modern world, but this is a relevant and interesting story, how much attention did you pay to historical detail?

HS: In terms of Production and Costume Design, we were very truthful. The world of Oktoberfest around 1900 isn’t known to people in general, not even in Germany. We took it seriously. We wanted to be as truthful to historical facts as possible. Then again, the liberty of fiction must prevail. That goes for character traits, the stylistics, the story line. In essence, we aren’t a documentary.

FC: A lot of research was done on Oktoberfest. Thousands of photos and illustrations were collected to perfect the art and costume design. On the other side, we used very modern cameras, the latest LED lighting technology and modern camera cranes to expressively use cinematography, more in an artistic way, less in a historic accurate way. When watching Oktoberfest you find elements from Western or Horror movies. We made absolutely no dogma and wanted to tell the story in a fresh and modern way.

HEN: Was making beer a character in the story a hard choice and what did you add that wasn’t in the script?

HS: I always wanted it to feel real. I studied the brewing methods of that time. It isn’t easy, because most brewing procedures are visually not interesting. It takes time, you can’t see it, and you do not partake in any of the process. But there are the troubles and the dreams of the characters that are making the beer and that’s interesting. Where are they heading to in their lives? What are their goals beyond the mere beer brewing? The beer, like Oktoberfest is just the canvas and real life takes place behind that surface.

FC: The way of making beer reflects two worlds: The more traditional world of the small Hoflinger brewery representing people who wanted to stay in the 19th century and on the other side you see the modern world of Prank’s brewery and especially his megalomania creating the biggest beer tent of all times with modern electric light. That said, Oktoberfest is not a series about beer making, it is a series that reflects a breathtaking time at the turn of the century with lots of inventions in science and art.

HEN: Lastly, this series has its fair share of blood — it’s even right there in the title — yet it doesn’t feel gratuitous to me. In the planning as well as in the day-to-day production, can you tell me about the choices you made on that? How do you find a balance between “visceral” and “gory”?

FC: These scenes shouldn’t be taken too seriously. When starting the preparation of Oktoberfest, we thought this gory humor you see excessively in Tarantino’s movies should be part of our show as well, in comparatively homeopathic doses. Our way of storytelling uses elevations of these scenes by purpose.

HS: There was no way around getting rid of violence in this setting. At some moment it all just had to explode. The question was how to display the violent acts. We don’t show much of the real stuff – it’s the image, the suggestion in the heads of the audience. That might make it brutal. More brutal than the mere image that in our case was more or less refined. I want the effect to be there without showing all the gore. That’s unnecessary and most of the time quite inelegant.