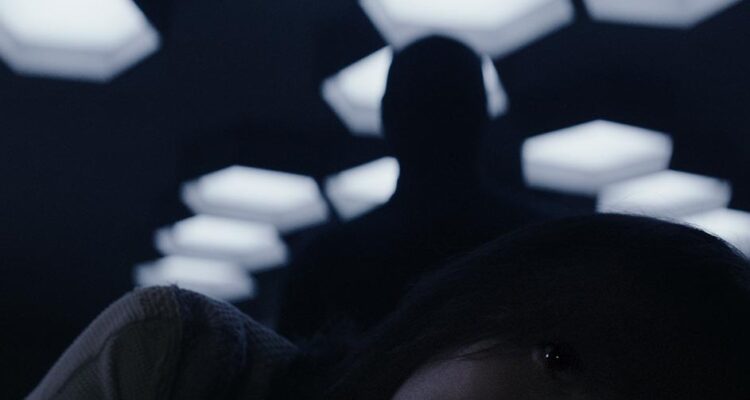 If there’s one thing most science fiction has in common, it’s the exploration of big ideas – typically set in an technically advanced, alternative, futuristic-type reality.

“I feel like all the best sci-fi is asking a big question,” says Nathaniel Atcheson, writer and director of new sci-fi film making the film festival circuit Domain.

The film is set in a post-apocalyptic world where much of humanity has been wiped out by a virus. To survive, people have gone underground, living alone in bunkers. Small groups of survivors can communicate with each other via closed networks. They can see each other and talk, but that is the only form of communication the survivors have with each other for years.

Though the movie is set in a future fictionalized world, it’s full of metaphors of our present-day, technology-dependent Western world.

“I wanted to make a movie that reflected our social media environment,” says Atcheson.

The intense sense of isolation felt by the characters is a theme explored on multiple levels – also a topic covered by modern-day sociologists and psychologists on the potential repercussions of spending days and nights on our devices, communicating in an artificial environment.

Another interesting metaphor is of how people in any society tend to organize themselves into a social structure: the leader, the geek, the rebel, the outsider, the everyman (in this case, woman), etc.

But as in any good sci-fi movie or thriller, there’s an undercurrent of malevolence about to brim to the surface and topple over whatever sense of comfort or structure remains.

The film has an undeniable Twilight Zone element that will keep you intent on trying to guess a possible ending. It’s what good science fiction does, it makes you think.

Don’t expect a splashy set with a ton of scenery. The  setting is as claustrophobic and drab as you would expect in a post-apocalyptic, underground bunker. Though there are supposed to be seven different bunkers in the film, it was actually shot rotated through one main bunker and with the assistance of blue screen. The set limitations actually add to the sense of post-apocalyptic dread quite effectively.

Though Atcheson’s film tries not to borrow from other films, as a huge fan of science fiction and of the Alien series, he wanted to set a similar mood to that sci-fi classic – particularly in having more drawn-out beats. In other words, the film isn’t afraid of taking its time to make its larger point and giving the audience its big reveal.

“You’re always trying to make your own thing, but sometimes you need that shorthand to discuss it with the creative team,” says Atcheson.

It’s a film to savor for its exploration of larger ideas relevant to our society today, and to enjoy as the layers are slowly peeled away to find the menace that lurks beneath.