Putt Your Fears Away At Haunted Mini Golf 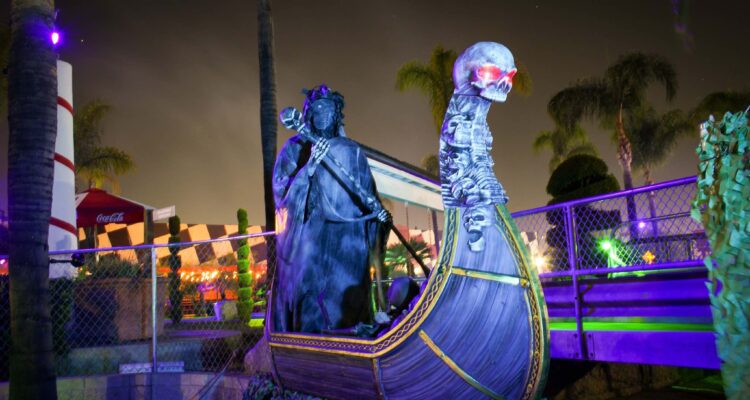 When pumpkin patches, witch forests and supernatural scares find their way into the world of artificial turf, putters and the hoped-for hole-in-one, it can only mean one thing: Haunted mini golf.

SpeedZone Los Angeles is debuting Haunted Mini Golf Sept. 24. Mini golfers will be able to participate in this new Halloween attraction Friday and Saturday evenings through Oct. 30, as well as Halloween night.

Two mini golf courses —  centered around a pumpkin patch competition between the fictitious Boomers brothers Fred and Ned — can be played. Dawn of Daytona, Fred’s family-friendly pumpkin-patch-turned-mini-golf-course draws on the sillier side of Halloween. Ned, on the other hand, cunningly poured toxic chemicals into his side of the patch, Spirits of Sebring, hoping to enlarge his gourds. However, he ended up giving rise to spirits and witches, breeding an eerie ground perfect for those wanting to be scared.

“We were trying to think of something a little bit on the safer side as far as everything going on in the world right now,” said creator Joseph Ancheta, recalling the inception of this Halloween activity. “Haunted Mini Golf seemed like something fun. It’s kind of the first (SpeedZone) attraction where you can come to get a scare or just have some fun.

VIP racing, go-karts and video games are some of the many other attractions at SpeedZone being offered this Halloween season. An indoor and outdoor bar will also be selling beer, wine and liquor along with various Halloween eats.