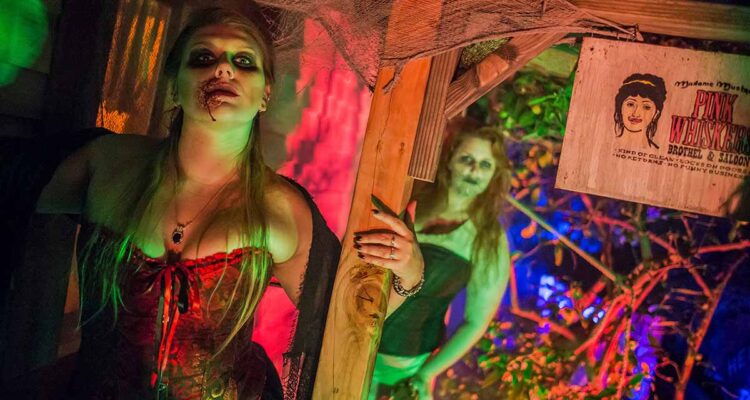 Higgins Manor is one of nine stand-alone mini haunt experiences in the Hall of Shadows. / Credit: Albert Lam

“Krampus: The Devil You (Barely) Know.”

And many, many horrifying things.

The list of panels, guests and activities for the new Midsummer Scream Halloween Festival continues growing  with quite an assortment of horror, Halloween and related themes – a black cat rescue will even be onsite – even as the event nears its climactic debut July 30 and 31 at the Long Beach Convention Center.

A few of the creators behind the Halloween convention known as ScareLA (which takes place the following weekend at Pasadena Convention Center), branched out this year to create their own event.

According to Rick West, founder and editor-in-chief of Theme Park Adventure and Midsummer Scream’s creative director, the festival embraces everything Halloween represents.

“Midsummer Scream isn’t a ‘horror convention’ per se – it is a celebration firstly of Halloween and all that holiday represents,” he says. “Naturally, there is crossover into the horror and sci-fi genres, and we embrace that completely. Our show is the coming together of cosplayers, haunters, Halloween fans, industry pros and icons as one big, scary family. It’s going to be beyond epic.”

West took some time from his busy schedule to answer several more of our questions about what Halloween and horror fans can expect from this latest addition to the horror-scape.

HalloweenEveryNight: What are the backgrounds of the show creators?

Rick West: Midsummer Scream’s core team really come from uniquely different backgrounds, with great strengths and experience. David Markland, our executive director, has extensive experience as an event producer; he recently worked on the 2015 Special Olympics World Games here in Los Angeles, and also works with Politicon. David is also the owner of CreepyLA. Gary Baker, our executive producer, owns his own audio/visual company called Show Development West, providing lighting and sound for corporate events here in Southern California. Gary was also one of the creative forces behind Ghost Train at LA Live Steamers in Griffith Park, which sadly, has been cancelled this year by other members of that organization’s board of directors. For the last three years, Gary and his team provided the fantastic A/V support for ScareLA, which we were part of before stepping away this spring. Gary also departed from ScareLA, and became an integral part of Midsummer Scream’s core team; we couldn’t be luckier and more pleased that he’s onboard. I am the creative director for Midsummer Scream. For almost 22 years, I have owned and operated Theme Park Adventure, which is actually the oldest existing themed entertainment fan site online. I also work within the themed entertainment industry as a show writer for Rethink Leisure & Entertainment. Johanna Atilano is co-owner of Theme Park Adventure; she also works full-time in the themed entertainment industry for BRC Imagination Arts. Claire Dunlap, our associate producer, is an award-winning, critically-acclaimed theatrical producer here in Los Angeles. Together we have created Midsummer Scream in an incredibly short amount of time. I couldn’t be prouder of this group and everything we have accomplished as a team.

HEN: What are your goals and general mission for this year’s event?

RW: Midsummer Scream is a weekend-long celebration of Halloween, haunted attractions and the horror industry itself. The event was created for the amazing haunt and horror community right here in Southern California, which is home to the most dedicated fans I’ve ever encountered. The general mission for this year’s Midsummer Scream is to give fans the show they want and deserve, showcasing everything from ridiculously talented makeup artists to some of the biggest theme park events in the world, including Halloween Horror Nights at Universal Studios Hollywood and Knott’s Scary Farm.

RW: Yes. David was one of ScareLA’s co-founders, and Johanna and I were producers on the event. My main responsibility was bringing the big panels and presentations to fruition, and Johanna also helped create the panels and presentations. She also worked closely with vendors and was largely responsible for that show’s education component each year, which she did a fantastic job with. As stated earlier, Gary Baker was our A/V partner for all three years at ScareLA. He also came with us to form Midsummer Scream. We’re thrilled about that, because he is the reason our productions looked so great while we did ScareLA. We can’t wait to see the audio/visual magic Gary makes this year for us at Long Beach Convention Center.

HEN: Why did you decide to branch out into a separate event?

RW: Due to fundamental differences, David, Johanna and I made the decision to leave ScareLA this past spring. Stepping away from something you helped create for over three years isn’t easy, but it was necessary. Gary Baker immediately pushed us to create something new; something that we could all be proud of and really take to the next level as a strong team working in absolute harmony in every aspect. What this new team has accomplished is completely staggering, and we cannot wait for everyone to come have a blast with us this summer in Long Beach.

HEN: What will set it apart from other conventions?

RW: We have a lot of components at Midsummer Scream that are unique to our show. One is the Hall of Shadows, a massive darkened area of the 90,000-square-foot show floor that features a full-blown scare zone designed by our good friend Larry Bones and his crew at Bone Yard Effects. Also in the Hall will be a slider demonstration several times each day, as well as a fantastic selection of haunted attraction previews and experiences for our guests to enjoy, free of charge. The Hall of Shadows will be fog-filled and full of roaming monsters, created exclusively by Bone Yard Effects. Another absolutely unprecedented component to this year’s show will be a major presentation by Walt Disney Imagineering that showcases the history and art of Illusioneering and how special effects are created for Disney theme parks around the world, from The Haunted Mansion to galaxies far, far away. Our Saturday night party, Noche de los Muertos, is going to feature the band that is forever synonymous with Halloween: It’s the Oingo Boingo Dance Party, featuring Johnny Vatos, Steve Bartek, John Avila and other original members of Oingo Boingo. The band is going to play for 90 minutes and will also judge contestants dressing up for our “Best and Worst of the ’80s” costume contest. Oingo Boingo Dance Party’s performance is the cherry on top of the biggest Halloween show anywhere, and we are so excited!

HEN: How many exhibitors and what big names can guests expect?

RW: We will have approximately 200 vendors and exhibitors on our show floor, including CalHauntS, Immortal Masks and VFX. Midsummer Scream guests will have access to everything from great horror-themed T-shirts to props, jewelry, artwork and live makeup demos. We’re even going to have a black cat rescue onsite so folks can take some very special – and mystical – kitties home to love forever.

HEN: Will there be a large celebrity component?

RW: There will be a certain amount of celebrities on the show floor at Midsummer Scream, but we honestly shy away from having a large section of people simply there to sign autographs and take photos with fans. Where we can, we find it fun to pair celebrities with our vendors and exhibitors. For instance, Bone Yard Effects, who did the makeup for An American Werewolf in London maze at Halloween Horror Nights here in Los Angeles in 2014 will have David Naughton at their booth all weekend – fans will recognize him as the film’s main character, David Kessler. This makes for a more cohesive experience for both guests and celebrities at Midsummer Scream. So, I wouldn’t say there will be a large celebrity component in that regard, but there will be a smart celebrity aspect to our show floor that will be very exciting for fans.

HEN: What kinds of panel topics and demonstrations can guests expect?

RW: We have major presentations from Universal Studios Hollywood, Queen Mary, Six Flags Magic Mountain, Knott’s Scary Farm and Walt Disney Imagineering. Those are the big theme park and attraction panels we have in store for our main stage throughout the weekend. We will also have a second stage with presentations ranging from popular new haunts here in Southern California, to a look at some of the most haunted bars in Los Angeles and beyond. We’re making sure that we have incredible programming all weekend long for everyone.

RW: I’d be remiss if I didn’t thank the community as a whole – from the parks and haunted attractions to the fans and vendors – for trusting in us and starting this new and exciting journey together with our team. This show is for the community – I sound like a broken record, but that’s honestly our motivation. We all love Halloween and of course, we love all that goes with it, getting to share that love with the greatest fans in the world is remarkable in every way, and we cannot wait to open our doors on July 30 at the Long Beach Convention Center for a weekend no one will ever forget. This is the beginning of something amazing.