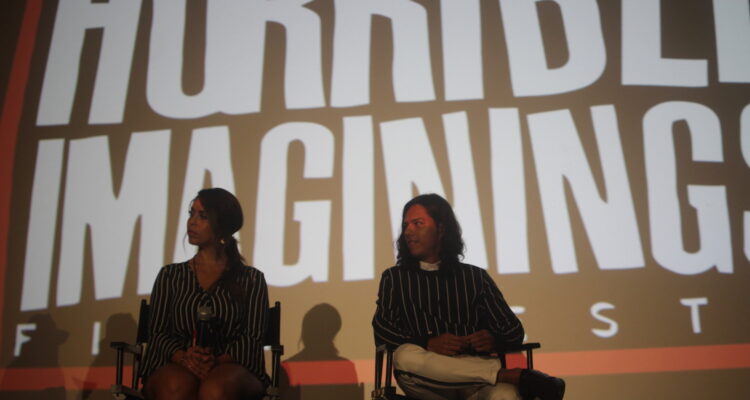 “The program was incredible, and what more could I really ask for than I’m sharing great films with people who appreciate them,” founder/director Miguel Rodriguez told the festival audience during the awards ceremony. Rodriguez said he received more than 1300 short and feature film submissions from around the world.

Snowflake, directed by Adolfo J. Kolmerer and William James, is a wild ride of Scorsese, Coen Brothers and Tarantino-era genre mashups in a tale of two hitmen stuck — literally — inside a film of fellow crooks and killers, an angel and a superhero.

During the voting process, three of the seven judges asked Rodriguez if both of the lead actors from Snowflake could win the award. So, in a strange series of events, Erkan Acar and Reza Brojerdi both took home the award for best Actor.

Set in a mental health facility, The Quiet Room following Michael (Jamal Douglas), whose attempt at suicide awakens a psych ward demon, but this isn’t your typical mental-illness-as-boogeyman type of movie. It’s much more real.

Douglas took home the award for Best Actor (short), and during a Q and A following the screening, he described his experiences with mental illness.

Douglas’ brother, who suffers from mental illness, saw the film and asked Jamal if he was playing him.

“What do you say to him? Because that could be very insulting. Jamal had the courage to say yes. And the response was a huge smile. Award deserved,” Rodriguez said.

The Returning, originally called 9.13, is a film is based on a true story. The 1972 Sungai Kerian tragedy, where a monsoon hit the town. A ferry carrying a bus of school children broke, causing the death of everyone on the bus. The film, reminiscent of Devil’s Backbone and Carnival of Souls, delves into Malaysian culture and lore, and was easily the most intense film at HIFF and picked up the Best Score (Feature) and Best Cinematography (Feature) awards.

Next year, Rodriguez plans to return to the Frida for HIFF’s 10 year anniversary. “This theatre is like a gem,” he said.

H.M. Cthulu and The Intriguer contributed to this story.