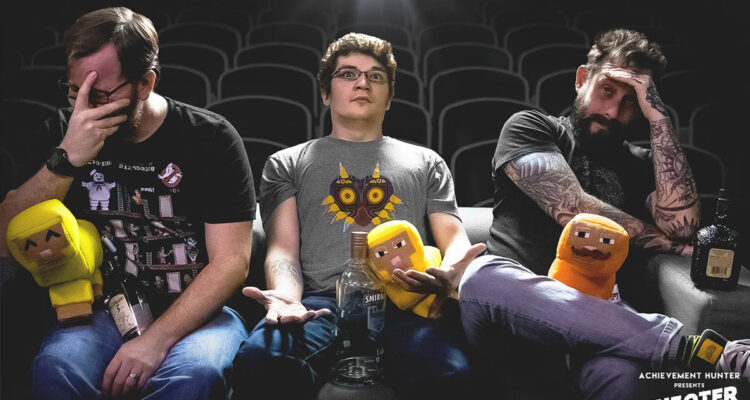 Watching a great horror film can leave you excited and exhilarated. But watching a bad one isn’t as bad as it sounds.

In fact, some of the guys from Achievement Hunter have literally made a show out of watching bad movies. “Theater Mode” launched April 29 and is available to subscribers at RoosterTeeth.com and AchievementHunter.com.

Here’s what one of the co-hosts, Achievement Hunter Senior Producer Jack Pattillo, has to say about the new show:

HalloweenEveryNight: How did the idea of “Theater Mode” come about?

Jack Pattillo: We’re all big fans of movies here at Achievement Hunter, so we figured, why not set our targets on some awesomely bad film as opposed to our traditional bad video game skills.

HEN: How close to “Mystery Science Theater 3000” is your show?

JP: It’s hard to make a show where folks talk over movies without the MST3K comparison. Obviously we’re huge fans of MST3K, but with the inclusion of a FaceCam and our direct interaction with the films, we’re hoping we’ll come across as something different.

HEN: Why does this format work so well?

JP: We’ve always tried to include our audience as someone sitting on the couch with us, now we literally have a couch. We’re just a few guys sitting around, goofing on movies with our friends, everyone has done that at some point in their life.

HEN: How bad are the movies you’ll be watching for the series?

JP: Some of the movies are pretty terrible. Our first movie, we watched a film from Ohio called “ThanksKilling” that was shot for around $3,500. The movie included a talking turkey, a topless pilgrim, 30-year-old high school kids and a lot of incredibly bad dialogue.

HEN: Are the movies all modern and in the horror genre?

JP: We’re planning on having a range of films for “Theater Mode.” If it’s bad, we’ll make fun of it.

HEN: You must see a lot of bad movies for this show – how do you stomach them?

JP: The good thing about bad movies is that they tend to be shorter. It takes about 20 to 30 minutes before really knowing that a movie is bad, and by then you’re already a third through the movie. The rest is just managing pain.

HEN: Have you ever seen a movie you just couldn’t get through, or do you find something redeemable in every movie, however limited?

JP: We try to find something redeemable in every film we watch, no matter how terrible they may be. Someone spent their time to make whatever it is we may be watching, so we’ll do the bare minimum and at least sit through it.

HEN: Does the level of bad movies you’ve seen ever depress you regarding the quality of entertainment available?

JP: I don’t think we get depressed watching bad films because we know there is so much out there. As technology has increased, so has the sheer quantity of content. Of course it isn’t all going to be amazing, but that’s OK because it gives us incredible fodder for “Theater Mode.”

Sign up for a free 30-day trial at RoosterTeeth.com/Sponsorship.