Fantastic Fest 2020: Something for Everyone 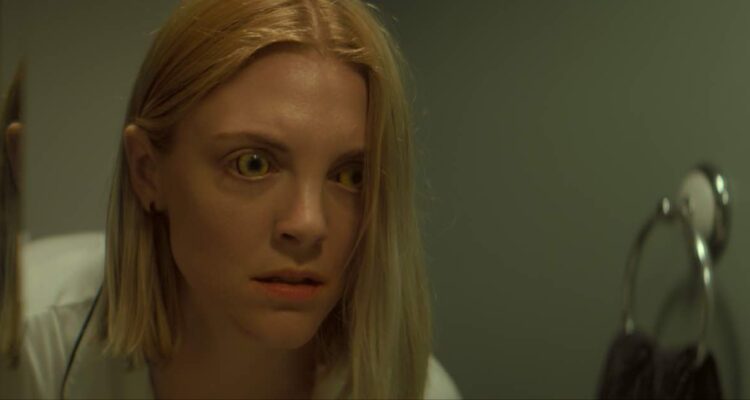 Despite the challenges of 2020, Fantastic Fest managed to expand its reach this year.

Normally held in Texas, the festival turned virtual and made all new features and live events available free for anyone in the United States.

“Despite the many hardships 2020 has thrown our way, the Fantastic Fest team knew we needed to stick to our mission of celebrating and championing genre films from bold, diverse voices — new filmmakers and treasured alumni alike,” Fantastic Fest programmer Logan Taylor said in a statement. “While we have a much smaller selection than in previous years, we’re delighted to showcase 15 films that express our brand loudly and proudly.”

Running from Sept. 24 through Oct. 1, 2020, the free festival offered 15 films and four blocks of short films, along with some classics, on Alamo On Demand. Plus it included interactive activities like watch parties, chat rooms and livestream Q&As following screenings.

Here are some of the film highlights:

They say that the entertainment industry can be a jungle and only the most bloodthirsty and tenacious animals can survive and make their way to the top. In Bloodthirsty, we follow indie singer Grey, who gets an invitation to work with notorious music producer Vaughn Daniels at his remote studio in the woods. Accompanied by her girlfriend, Charlie, she hopes to better her career and music, but finds herself haunted by visions of herself turning into a wolf. As her work with Vaughn becomes emotionally demanding, the singer begins to develop murderous urges and a hunger for flesh.

Dubbed “the Long Island Lolita,” teenager Amy Elizabeth Fisher gained infamy in 1992 for shooting and severely wounding the wife of her lover, Joey Buttafuoco. The story was so popular that there were three made-for-TV movies produced featuring stars Drew Barrymore, Alyssa Milano and Noelle Parker, each as Amy Fisher. Director Dan Kapelovitz mashed up these three into one as both a critique and celebration of early ‘90s tabloid culture. In a Q&A at Fantastic Fest, Kapelovitz explained how his film was “three different perspectives of the same event.”

Living with one parent for the majority of her life, Bella Thorne portrays a girl on the hunt to find her absent father. Directed by Chad Faust, Girl shows how not having a father in her life impacts her. The girl goes on an emotional, but suspense-ridden journey in search of her father, even after he had been abusive when she was a child.

“Part of her journey is from what we may think of as girl and her transformation into woman,” said Faust during a Q&A at Fantastic Fest. Faust later explained how Thorne was perfect for this role since she used her emotions from real-life experiences for the film — and it showed.

Hot to Deter a Robber

In the film How to Deter a Robber, Jimmy gets his girlfriend, Madison, and her uncle, Andy, to watch the movie Santa Claus Conquers the Martians as part of a drinking game. The reason? According to Jimmy, because: “It’s not that good, but wildly entertaining.”

Unlike the classic (unintentionally funny) B-movie, writer and director Maria Bissell crafted a wildly entertaining and quality comedy-thriller that manages to deliver on both the comedy and the thriller elements. How to Deter a Robber takes place in a desolate town in Wisconsin, following a stubborn young woman, Madison, and her naive boyfriend, Jimmy, as they fight off boredom during the long holiday break. After noticing a light on in a neighbor’s empty cabin, the pair become amateur detectives. But after a string of robberies occur in the area, Madison, Jimmy and her uncle, Andy, are forced to show down against a pair of amateur burglars.

Set during Christmas, the film has a lot to offer with potentially star-making performances from Vanessa Marano and Benjamin Papac as the young couple, along with timely themes about the importance of overcoming obstacles and learning to listen to those you may be opposed to. How to Deter a Robber makes the most out of its brief 85-minute runtime. Bissell manages to achieve a surprising feat — crafting a film that begins as straight-up comedy that quickly morphs seamlessly into a tense home-invasion thriller. This film is a fresh kind of Christmas film that is likely to become a crowd favorite.

The Boy Behind the Door

Directed by David Charbonier and Justin Powell, The Boy Behind the Door follows best friends Bobby and Kevin, who are kidnapped while walking home from school. The two face countless obstacles as their kidnapper continues to try and murder them every time they try to escape. As the movie progresses the suspense drives harder and will definitely make you cringe in fear for the children as the two try to fight away from their kidnapper. Their mantra “friends till the end” is put to the ultimate test throughout the film.

Drama-horror film The Stylist follows a female serial killer who also happens to be a hair stylist. Based off the short film of the same name, The Stylist is directed by Jill Gevargizian and stars Najjara Townshend and Jennifer Plas, centering around a lonely hair stylist named Claire as she lives a double life as a serial killer that scalps her victims and wears their hair. The film doesn’t concern itself with the typical tropes of the serial killer genre. There is no detective hot on her trail or suspicious people around her. Claire lives her daily life and double life with the only conflict coming from within herself.

The themes of the film are simple but executed brilliantly. Obsession and belonging are themes that drive The Stylist through its 108-minute runtime. With a killer opening that comes out of nowhere, the film doesn’t rush itself with heightened kill counts or needless exposition. We as the audience are taken on Claire’s journey as she struggles with her physical compulsion to kill, while clearly having a desire to live a normal life and coveting what others have.

The Wolf of Snow Hollow

Jim Cummings proves that he is a triple-threat in this dramedy/horror by writing, directing and acting as the main character of John Marshall. The Wolf of Snow Hollow follows John as an officer and son to the sheriff of a small mountain town named Snow Hollow. Life for John is not so easy now, however. With immense pressure from his sick, stubborn father, his struggle for sobriety, his not-so-easy to manage ex-wife, and a reckless daughter, the last thing he needs is a dead body turning up at a local rental cabin. But this was no homicide — or was it? With the department not used to such violent attacks, they turn to the community for help, but the bodies keep showing up, strangely, always after a full moon. … The movie’s great character progressions from Julia, the sheriff and the rest of the police department, as well as John’s internal struggles are an entertaining ride of ups and downs — all eventually tying together a memorable ending to a great story. The film is also notable as one of legendary actor Robert Forster’s final roles.

While this year’s Fantastic Fest looked a lot different on a virtual platform, it still brought a good share of quality shorts.

Blocks is an existential comedy about the mother of two young children who begins to spontaneously vomit toy blocks. Writer and director Bridget Moloney does a great job exploring the stress and paranoia of being a young mother, while balancing it with the film’s more absurd comedic elements. It is well-crafted and thought-provoking with a superior central performance by Claire Coffee.

I Love Your Guts, from writer and director David Janove, is a comedic thriller about two girls who are working the graveyard shift at a fast-food restaurant. Their typically boring night turns into terror when they have to fend off a belligerent drunk man while also confronting their own friendship. While definitely more of a comedy than a thriller, I Love Your Guts develops ideas of friendships, growing apart and growing up.

A Solution for Sadness is about a mysterious package that arrives at a young woman’s doorstep, offering her a reprieve from her depression. Things turn for the worst when the package brings consequences that are more permanent and pervasive than she realized. Directors Tuixem Benet (who starred in the film) and Marc Martinez Jordan (who wrote the film) develop the idea that we put on masks to hide who we truly are.

Jack and Joe Don’t Want to Die follows a young man named Jack who works at a storage facility that artificially freezes people so they cannot grow old or die. Jack is set to be frozen as well, hoping to go to a better time where he won’t be reminded of a painful relationship. This is when he is forced to wake up Joe, a young girl with a deadly disease that was hoping to wake up in a time where there is a cure but is woken up because of insufficient funds.

Please Hold is set in the near future and follows a young working-class man who is wrongfully arrested. Realizing he has no means of recourse in the fully automated, fully privatized justice system, he attempts to reach a human being who can set things right. While described as a biting satire, its themes might seem all too real for some. Highly imaginative, with its futuristic depiction of drone cops and ad-based lawyers, this film is a showcase for writers Kristen “KD” Davila and Levin Menekse, who balance their themes in a tight narrative.