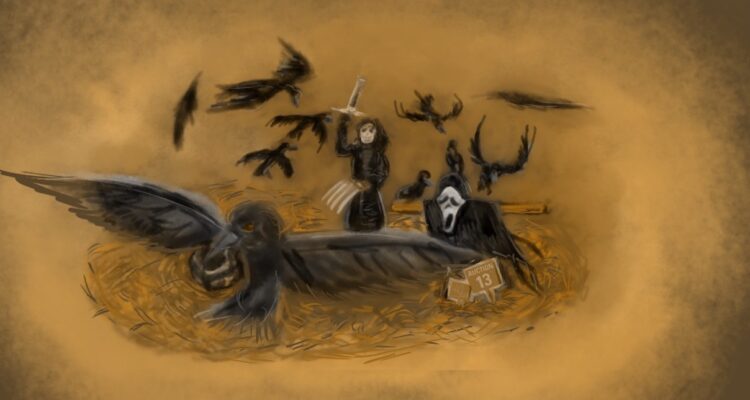 Props and wardrobe from some of the most popular Hollywood horror, sci-fi and action movies will be up for auction Sept. 20 at the 5th Annual Entertainment Memorabilia Auction in London. Illustration by Mari Rosa.

Stephen Lane has some very sweet early treats for Halloween. If you’re the highest bidder.

The CEO of London-based auction house Prop Store is offering up a treasure trove of real movie props and wardrobe from some of the most popular horror, sci-fi, and action movies of the last half century at the 5th Annual Entertainment Memorabilia Auction, Sept. 20 at London’s Odeon BFI IMAX.

Included in the auction will be Freddy Kruger’s glove from Nightmare on Elm Street, as well as a Terminator endoskeleton, Anakin Skywalker’s lightsaber from the Star Wars prequel trilogy and Steve Rodgers’ distressed army costume from Captain America: The First Avenger. Several items from Tim Burton movies Edward Scissorhands, Corpse Bride, Batman Returns and Planet of the Apes.

Lane said he was “thrilled” by the collection of items about to go up for sale.

“Kruger, Jason Vorhees, and Ghostface are some of cinema’s most well-recognized horror villains,” Lane said in an email from London. “Items for horror movies are always hugely popular and some horror collectors are the most passionate I know. Each year we have more and more exciting content to offer collectors and movie fans.”

The auction’s full catalogue of items will be revealed online Aug. 31, and opens to the public for preview between Sept. 6 and Sept. 20 in Waterloo, London. The auction will be streamed live online and participants can register at propstore.com.

Halloween Every Night: What do you anticipate will be the big sellers?

Stephen Lane: It’s always hard to predict what will be the top sellers on the day, but I love the items we have from the Aliens franchise, including the Queen Alien puppet from Alien vs. Predator and the xenomorph creature head from Aliens.

I’m sure the Freddy Kruger glove, and the Jason mask and machete are going to be hugely popular too. We’re already fielding a lot of questions about those items.

HEN: How do you acquire the items?

SL: They come from sources all over the world. Film studios and production companies, crew members, special effects artists, rental houses and of course from private collectors too. There’s no easy way to uncover these treasures and it takes us a year of sleuthing to put together exciting content for these annual sales.

HEN: Which prop have you owned the longest period of time?

SL: I’ve been collecting for close to 30 years, but as this is my livelihood as well as my hobby, I’ve had to make some hard
choices along the way. I’ve had to sell many items that were very dear
to me just to pay the bills or make the payroll. One of the items I’ve
owned the longest is Arnold Schwarzenegger’s ‘Atlantean’ sword from Conan The Barbarian, which I’ve owned since the mid 1990’s.

HEN: Out of all the items being auctioned, which might be toughest to sell and why?

SL: Movie vehicles can be quite a hard sell as they require so much space and a reasonable degree of logistical consideration, like shipping, storage and handling.

We have one of the faux race cars from the Ron Howard film Rush in this sale. It’s the James Hunt ‘Heskith’ car, the first car that James Hunt ever raced in. Perhaps that will find a new home after this sale or perhaps we’ll be rolling it back into our warehouse for another day.