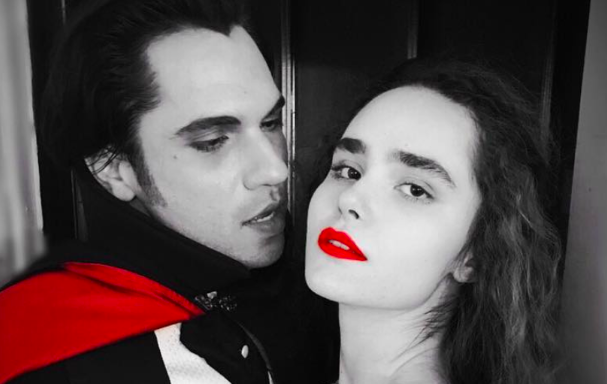 A New Take on ‘Dracula’

The immortal vampire novel of decadence, Dracula by Bram Stoker, is coming to life in the Camino Real Playhouse. Until Oct. 22, you have a chance to experience this undeniably thrilling, modern adaption to the classic story.

The sweet-natured heroine Lucy Seward is portrayed by Christina Jesenski, of Rancho Santa Margarita, who recently landed second place in the state in Solo Acting at the Thespian Festival.

In the original text, there are two main female characters: Mina and Lucy. While the play combines the two into one, Lucy Seward is a complex character.

“The hardest part is, almost everyone knows some kind of variation of Dracula; to portray a piece of work that is this well-known can be tricky. In this love story between Dracula and Lucy, imagine being this well-adjusted, proper Catholic girl. You have to find a way to be attracted to uncertainty, the whole balance of being drawn to something you are not supposed to be attracted to,” Jesenski says. “And in the scene of drinking blood … there is a fine line between erotic and gory. It’s supposed to be a scene packed with sexual tension, but when you think of the reality, it is gross. It is drinking blood. To transcend the foulness of it into something desirable was very challenging.”

Off the stage, she is also an avid cosplayer and horror-lover. “My favorite horror film is Dead Silence … because unlike many other films that use music and sound effect to create the horrifying ambiance, it uses silence. And the drop of all sounds is so unique and really works artistically … and I love Halloween. I go all out. Because I am really interested in costumes, last year I was the Undertaker from Black Butler. I’ve also cosplayed Alice Liddell from the game Madness Returns… I think for this year, I’m continuing the theme of vampire and dress up as Lucy again.”

On her passion for acting and art, Jesenski says, “I had a teacher that showed me that art has an influence on people and it is not just an artistic influence – it can be a political one, too. It opens up the minds of audiences and they will have to carry that around with them even after the art stops. And that ability to leave a positive impression on people is what ultimately drives me to pursue acting each day.”

Dracula is playing at the Camino Real Playhouse in San Juan Capistrano. The show runs Fridays, Saturdays and Sundays through Oct. 22.