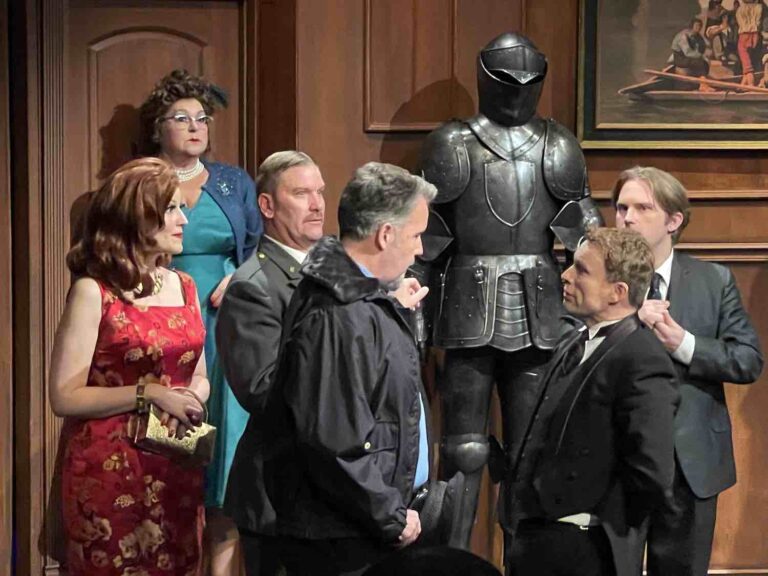 Movement is all around on Maverick Theater’s newest production, Clue. The characters seem in constant movement. The dialogue flows like a river. Even the stage is rotating. In such a long, steady dance, does it really matter just whodunit?

One night in 1954, a group of six strangers arrive at a New England mansion in response to an invitation. Wadsworth, the butler and Yvette, the maid greet the guests and quickly give them pseudonyms: Colonel Mustard, Mrs. White, Mrs. Peacock, Mr. Green, Professor Plum, and Miss Scarlet. Soon, a mysterious Mr. Boddy arrives and it is revealed he’s been blackmailing all the guests. When Boddy ends up dead a few minutes later, a screwball comedy ensues.

The staging, specifically the use of a periaktos (Google it), is truly inventive, turning a nine-room mansion into one set with rotating walls. Despite the clever device, it allows the ensemble to shine and the plot to twist without distraction.

The cast features a mix of company players as well as Maverick newcomers, but the strength is how they work as an ensemble. That constant flow of people, motives and dialogue demand the kind of teamwork we need in congress, but at least for about 90 minutes we get it beautifully on stage.

Does it matter whodunit? Nope. Will you actually Google what a periaktos is? Probably not. Is “Clue” a fine evening out anyway? You bet your life.