True Escape!: I Lifted The Curse Of The Weeping Witch! 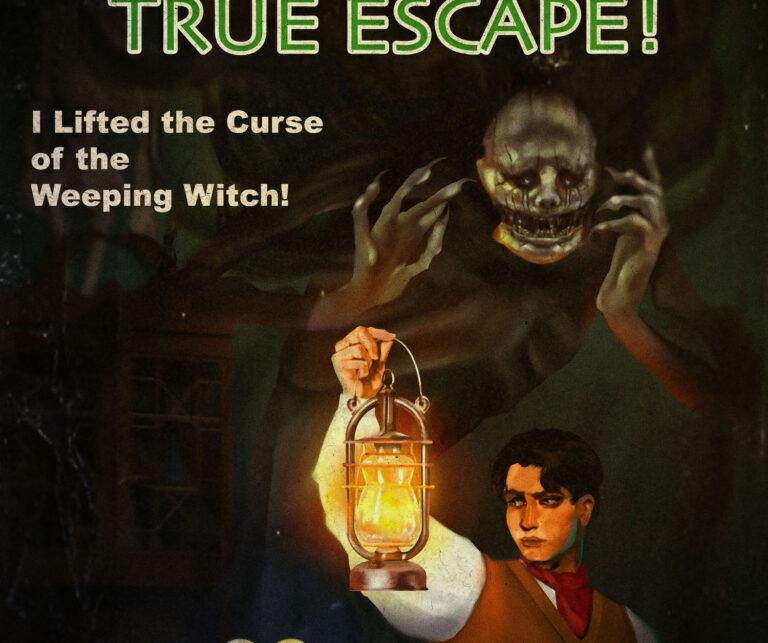 Editor’s note: As a service to readers, H.E.N. continues to publish dispatches from our special correspondent Ray-Edgar Upton Spillane, who travels the world in search of real men’s adventure, epic peril, and daring escape.

A look of dread hung on the faces of the group standing in the creepy old study of that creepy old house as I read it aloud. I wondered how I managed to end up here, trying to beat a curse and the cold presence of something in the air.

I don’t believe in a lot of old superstition. But I had a run in with the old man’s daughter a few years ago. She was a psychic trying to rid people of their curses. She meant well, I guess, but her success had cost her. Now it was costing all of us.

The group had all come seeking her help, expecting to rid themselves of their jinxes and maledictions. Instead, they got an apologetic letter from old Doc Rubinstein. I’m not sure why I was here. I guess the old man needed a witness. A skeptic.

Margret Rubinstein called herself Madam Ruby when she wasn’t doing her science gig. She was an engineer who’d created some kind of curse-extracting machine. I looked around at the poor suckers who thought they had picked up a hex at a flea market like they’d caught the flu. But maybe I wasn’t well myself. Things were beginning to move around Ruby’s study and a ventriloquist’s dummy was suddenly struck with the power of suggestion. What the hell had Ruby done?

The old man claimed she was extracting a so-called curse when she released what has been known for centuries in spiritualist circles as The Weeping Witch. It mimicked the sound of a woman crying, luring people into the darkness, then sucking the life out of them, he said. I would have snickered, but it was then we could hear her scream.

“Trust me when I say that ending your curse, and ending the generations of pain, is worth risking your life for,” he wrote. I was in no position to argue. As the light flickered on and off, we caught glimpses of her. Of it. Only our talisman saved us. We had to put Ruby’s machine back together fast or it would have been all our souls.

The group worked together as time ran down. The actress found one piece of the machine. The salesman found another. We scoured the study to put the final pieces together. We each looked into the eyes of the others as an acknowledgment it could be our final act as the room seemed to writhe and shake the witch from the walls.

We’d lifted the curse and sent the witch to the gates of hell. But it wasn’t enough to save Ruby. Maybe her sacrifice helped save us. If I ever see her again, I’ll owe her a drink and an apology of my own.