New ‘Playing Dead’ Podcast Is All About The Final Act 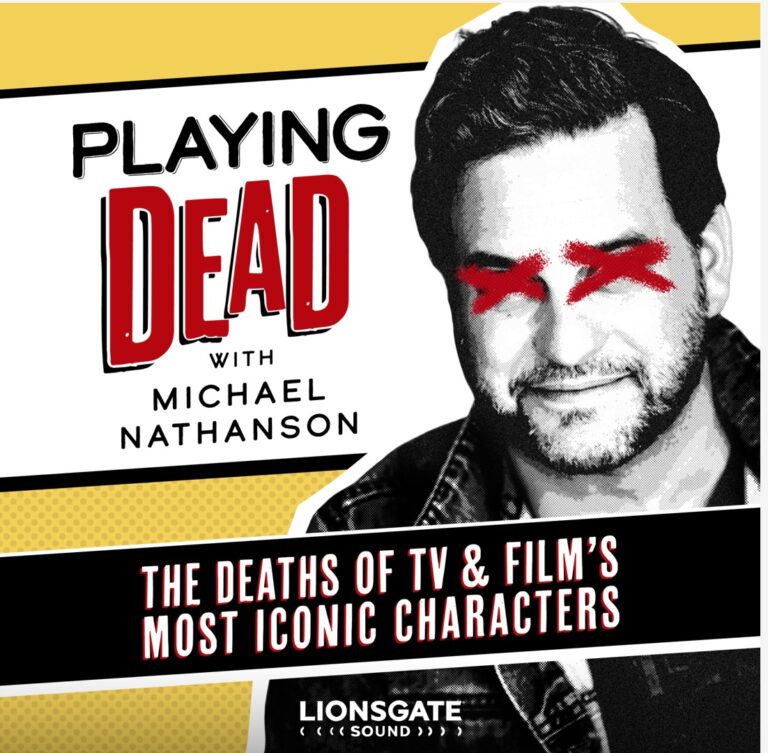 A new podcast featuring actors discussing their deaths in movies and TV shows is just the kind of weird we need right now. Actor Michael Nathanson hosts the show, based around his own experiences in Hollywood. / Image courtesy of Lionsgate Sound

Some people think a lot about death. Actor Michael Nathanson is hosting a new podcast about it. But refreshingly, it’s actually about the art of death in film and TV.

The new podcast Playing Dead originated from the ashes of Nathanson’s character’s death in The Punisher a few years ago. Usually, death is kind of, ya know, final, but for actors, it can become a career boost. Exactly what kind of effect, and how actors have dealt with it is all a part of the show.

Halloween Every Night recently chatted with Nathanson about the beginning of his show about the end.

Halloween Every Night: What is it about death in the movies or TV that is so interesting?

Michael Nathanson: When a character dies in a TV show or a movie, it immediately sears them into the consciousness of the viewer, and that character stays with them long after the show. And it seems that those characters are the ones that truly live on long after the show or film has lost its grip on the public. It’s probably because we all feel that pull towards the idea of mortality, and what that might mean, so, somehow deep down, we relate to those characters even more. It’s happened to so many actors in these worlds, and those deaths have endeared those men and women in the hearts and minds of the fans and formed a deep bond that can never be broken.

HEN: Also, how can it define an actor’s career — for better or for worse?

MN: Some actors are known for great deaths in movies and TV, and sometimes a death can lead to an even better job. Sometimes it can make them an even bigger character in something else, and, of course a character can be known in a certain way and then never work again. This business is a true enigma, but for some reason throughout the history of the screen, a great death is the most memorable experience for a viewer, and that emotional bond is something that never breaks.

HEN: It seems like you’ve thought a bit about your death in The Punisher. As an actor and creative person, lay it out for us and how you approached it.

MN: I knew in advance that I was going to die on the show. Many times, actors are either surprised, or go on for a number of seasons, until it — their character’s death — is revealed, but knowing that I had a certain amount of screen time, and a certain arc to my character, I was able to think about the journey from start to finish. I wanted the audience to react to and embrace my character and then ultimately be horrified and gutted when I was killed.

So many times people come up to me on the street saying ‘oh my god, I totally hated when they killed you. I screamed and cried and threw shit at the TV.’ When a death comes out of nowhere like that, and it’s a character that has endeared themselves to an audience, it definitely feels like a gut punch. But it also creates incredible stakes for the show as a whole, and being a part of that is very exciting, because just like life, anything can happen at any time.

So my goal was to play it as a character that was enjoyable and fun and someone the audience could relate to in a superhero show, and also someone who is always there to tell the truth and give the realistic perspective. So knowing that, at some point, that would be taken away and there would be more chaos as a result, I felt I needed to help that journey for both the other characters in the show and the audience.

HEN: How do you think about some famous movie deaths like Edward G. Robinson in Little Caesar or Robert Shaw in Jaws … or even King Kong, do you think to yourself ‘now THAT’s a death!’?

MN: There are so many great deaths I wish I could explore and talk to the actor about, and Robert Shaw in Jaws is definitely up there.  One of my prized possessions is the limited-edition Jaws Shark Biting Quint Funko Pop, it’s bloody awesome. Janet Leigh in Psycho is one of my favorites, and Rutger Hauer in Blade Runner.

A death can be subtle, or death can be triumphant and chaotic, but it really comes down to how the character has been portrayed, and how they are connected to an audience and given a sense of humanity and understanding and can access to something greater than themselves, thereby allowing us as a viewer to process our own lives and their meaning.

HEN: I really could easily go on with you all day about death on screen — or off it, but I want people to listen to the podcast, so tell me about how it came to be and what listeners can expect.

MN: I initially came up with the idea while awaiting my own death on the set of Marvel’s The Punisher and thought ‘man, I wish there was a way for me to continue on in this universe.’  Then I began thinking about all the other actors who have gone through a similar experience, never wanting to leave the world in which they inhabited, and I wanted to see how other actors felt about it, how their deaths affected them, and how audiences have continued to relate to them. I thought it would be an amazing group therapy session for me, and those actors and the world at large.

I have a unique perspective to geek out with my peers and help bridge that gap between those of us on screen and those who watch us and connect with our characters. I want to sit and chat with others who have been in my shoes, talk about their journeys as those characters, as actors, and as fans themselves.

These are not your typical interviews— we’re talking deep dives into the heart of fandom, from an insider’s point-of-view. It’s actors and creators sharing experiences from the front lines, giving an honest upfront look at what it’s really like to create these roles on screen and what happens before and after these characters have been ‘retired.’ Each interview is a collection of funny stories, interactive elements, and behind-the-scenes secrets that will hopefully both entertain and enlighten.

HEN: In a show all about endings, where do you want this to go?

MN: I’d love to continue to explore iconic deaths from the history of cinema, not just from the sci-fi and geek world, but other memorable deaths as well.

My hope is to also do a full season of iconic TV deaths, especially from the last 20 years, the so called ‘golden age of TV.’  I could also see us doing a whole season of cartoon character deaths, animal deaths, puppet deaths, the list goes on and on. There’s not a pre-requisite to be human to have a great death that can affect the world.

I’d love to bring the concept to TV as well, and I have a lot of ideas and thoughts, so stay tuned.  To be honest, I see a lot of potential, and I hope this exploration never ends, well, at least, until my own ‘real death.’ But then, of course, who knows what happens after that.

“Playing Dead” is available on Spotify and Apple podcasts, as well as on its own site at Lionsgate Sound.