‘Little Shop Of Horrors’ At 60: Still Worth A Visit 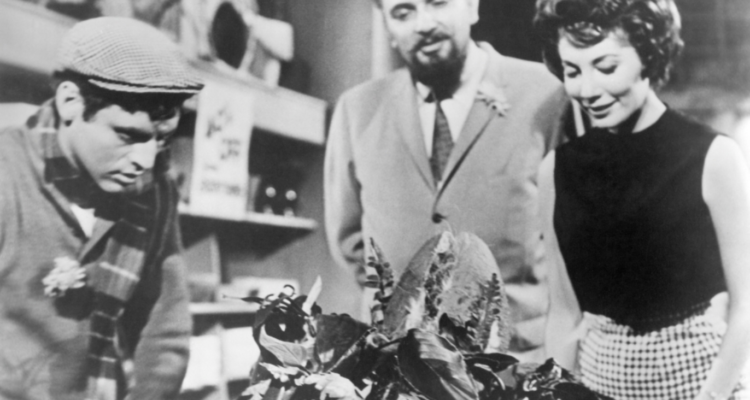 Jonathan Haze, Mel Welles and Jackie Joseph in Roger Corman's classic "Little Shop of Horrors," which turns 60 in Aug. of 2020.

Director Roger Corman’s horror-comedy masterpiece, Little Shop of Horrors, is a farce, if it wasn’t obvious.  One that holds up even 60 years later.

Released in August of 1960, the impact of Little Shop of Horrors can still be felt today. Like many of Corman’s films, it has gained a cult following since its release, even finding enough popularity to inspire an off-Broadway musical which many people might be more familiar with.

Little Shop of Horror’s success derives from a multitude of factors, mainly it’s B-Movie nature. Corman has become an icon of B-movie filmmaking — low budget productions that typically emphasize entertainment value over perceived quality filmmaking. This works to the film’s advantage though, heightening the comedy in the film and creating much of the charm that still holds up today, as you watch Seymour’s work and love life spiral into bloody chaos.

With B-movies, there was little-to-no studio interference, or, a real studio at all. It is just the cast and the crew with minimal money trying to make the best film they can make. This sort of creative flexibility creates the film’s unique sense of humor, which combines dark humor with slapstick comedy. Every scene bursts with energy and passion that we don’t see in many movies today. It’s hard to imagine any studio movie having scenes with a sadomasochist dentist.

What makes this movie impactful is how it balances horror and humor, something that horror comedies typically struggle with, leaning drastically to one side over the other.

In Little Shop of Horrors, Corman manages to make his film gut wrenchingly hilarious while equally unnerving in other scenes, specifically when timid hero Seymour is forced to feed his plant human flesh so he can keep his place of employment open. Intercut this with a pair of foolish and quirky detectives who notice the bodies turning up on Skid Row and it is easy to say that there is no other movie like it.

This film has something for everyone. For horror fans it has a grisly plot and some frightening imagery. For romantics, it has a unique love story. And for those looking for some levity in times that may feel dark, it has all the comedy you need to leave you feeling sore from laughter when you wake up the next morning.

Corman’s horror comedy paved the way for generations of filmmakers. With its bone-chilling horror, offbeat humor, and absurd plot, Little Shop of Horrors is unlike anything you will ever see, with the added bonus of a young Jack Nicholson in a memorable cameo. At just over an hour, it’s a safe bet for a quick escape. But watch your fingers.

The film is available on YouTube and both its original and colorized form on Amazon Prime.