Zombies Triumphantly Return To The Maverick in ‘Living Dead’ 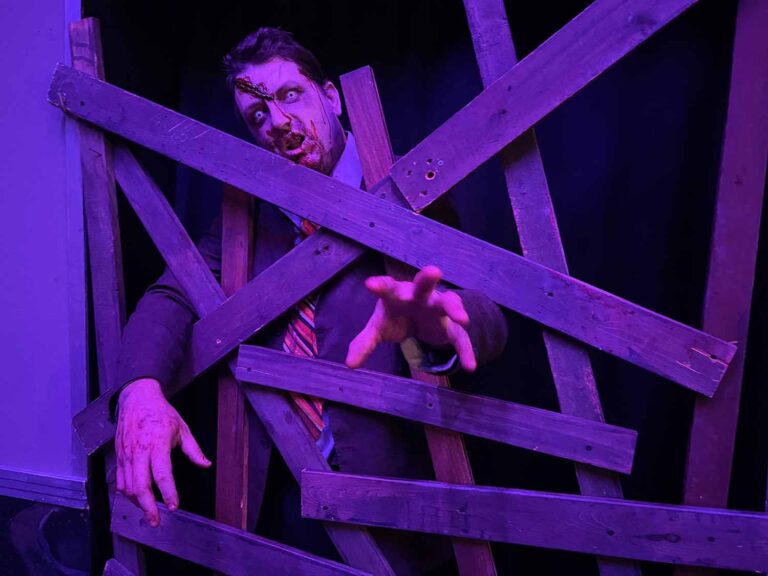 It’s good to know these zombies have so far survived the pandemic. Strangely, it’s a sign that things are — sort of — back to normal.

So while you wouldn’t call the 2021 production of Night of the Living Dead exactly hopeful, it is sharp, taut, intense, and propelled along by what might be the best cast yet for this long-running production.

Led by Scott Johnson — who returns to the role of Ben after more than a decade away, and was the first to play the character at The Maverick — brings an intensity and physicality that becomes the essential spark to this production.

In the many versions of Ben over 16 years, Johnson, with all the rough edges implied or displayed through the story, is the action hero. Ultimately, he is just as desperate as everyone else trapped in the Pennsylvania farmhouse but the only one fit to lead.

Of course, the supporting cast is seasoned and provides a combination of lived-in performances and re-invention. Most have played these characters before, but bring more depth and realism over time, not fatigue. Briana Donze’s Barbra is always vulnerable and tragic, but capable of reaching a certain inner strength. Frank Tryon’s Harry is a dinosaur of 1960’s machoism and a foil to Ben, and pretty much everyone with decency and reason. He’d be hilarious if there weren’t still so many of him around.

What’s really fun is to see is Jaycob Hunter’s hippie re-do of Tom. Bringing some subtle comic touches helps provide dimension and balance to the story. It’s one of the best new elements to the production.

After 2020’s Covid-safe immersive experiment for NOLD, it was uncertain if an audience would return to the Maverick for this essential OC Halloween event, but somewhat slowly, they are. Some seemed to resist the theater’s strict Covid protocol. Others have made their way back. Perhaps more importantly, new audiences are discovering the production.

An opening weekend audience of mostly newcomers jumped, laughed, gasped, screamed, cheered and clapped in all the right moments. It’s another good sign that at least some things — even if they are led by zombies — are bringing us back to … eh, normal.