Maverick’s ‘Jekyll And Hyde’ Allows The Mystery To Remain 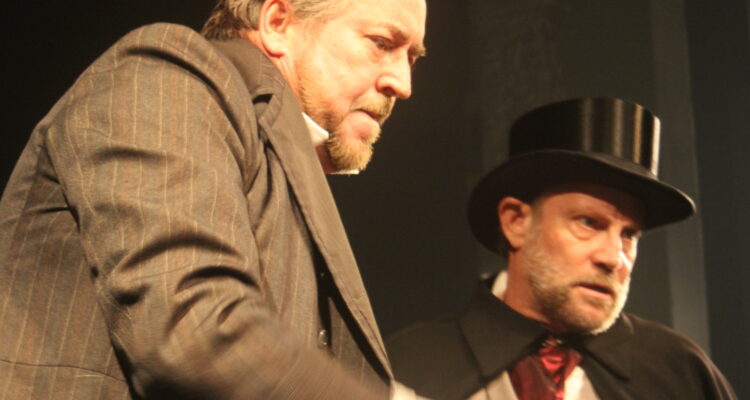 As long as there is duality to man, Dr. Jekyll and Mr. Hyde will be relevant. It’s been interpreted as everything from a metaphor about human psychology to a parable about drug abuse, even as an antihero comic book star.

It’s also a really fun stage production, when in the hands of the Maverick Theater. Brian Newell’s production, based on Jeffrey Hatcher’s adaptation, examines Robert Louis Stevenson’s character’s in ways most audiences aren’t used to. And while it does nothing to clarify what Stevenson’s original intent might have been, it’s thought provoking and that’s an advantage.

Thrusting the actors into the middle of the audience — literally on a thrust stage — forces a closer look. Each scene becomes more powerful. Minimal sets strip away gloss and distraction and keep the focus tightly on the struggle between Jekylll and his other, evil self.

Brian Kojac’s Jekyll is gentlemanly, and seems essentially a passenger to events. All the elements of other personalities snake around him, seemingly beyond his capability any longer to stop them. Mark Coyan’s Hyde is in control. With the battle already seemingly lost, the question becomes how long before there is nothing left of Jekyll, or Hyde is finally caught and destroyed?

The versatility of the supporting cast is critical in a play like this, with Glenn Freeze, Scotty Keister, Natalie Roy and Alexandra Wesevich adding dimension and heartbeat to the idea of duality, though it also provides some confusing moments. Hailey Tweter’s Elizabeth maintains a vulnerability that draws out the complexity of Hyde’s menace as well as the weakness that eventually destroys him.

While the Maverick’s Dr. Jekyll and Mr. Hyde is a minimalist thrill and stark, bare bones kind of production, it still leaves plenty to chew on as you make your way home and draw your own conclusions under the moonlight.