Maverick’s ‘Living Dead’ 2022: It’s All About The Barbra Pivot 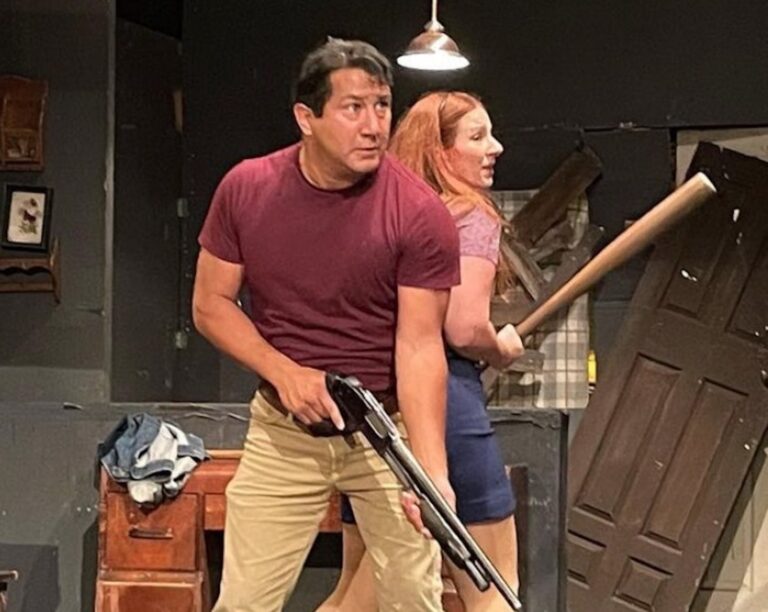 Andy Pinon as Ben and Briana Donze as Barbra in 2022's "Night of the Living Dead" at the Maverick Theater in Fullerton, Calif. / Photo by Jessica Peralta

Barbra and Johnny just wanted to put a wreath on their father’s grave. Then it all went to hell.

That’s the famous set up for the character of Barbra in George A. Romero’s 1968 classic Night of the Living Dead.

But in Maverick Theater’s long-running seasonal live production, the character has been interpreted different ways from that point on. Different actresses have played the character in their own ways over the 17-year run, but Briana Donze has come to know her best, playing her longer than anyone, and is now one of the longest-tenured members of the cast.

Different actors have played the lead character of Ben over the years as well, and this year, Donze and director Brian Newell developed a bit of a Barbra pivot, an approach, out of necessity, to playing against two very different Ben actors in the 2022 season.

“Getting to play different Barbras this time is really cool and refreshing,” Donze says. “Brian made the choice to play off our different dynamics, so I play a little different Barbra for each one.”

For those unfamiliar with the classic film, Ben, played by Duane Jones, is a historic and barrier-shattering performance as the hero who just happens to be black. Unlike films of the time starring Sidney Poitier or Harry Belafonte, Ben is a black lead whose race is never part of the story or written character, and in fact, is never even acknowledged. It’s a small, but incredibly important distinction for 1968 and one which lessons have yet to be fully learned by Hollywood.

Barbra however, remains largely a product of her time, especially for horror movies. The damsel in distress, her character is established, then becomes mostly helpless and almost catatonic.

Newell’s production has given wiggle room for both characters to change with different actors over the years. Donze’s Barbra has evolved over her eight years in the role. Though she teeters toward catatonia early in the story, she develops a harder edge and even forces fellow damsel in distress Judy to grab a bat and “FIIIIGHT!!”

In this year’s run, Ben is played by Andy Pinon and Bryant Moon-Watson, depending on the night. Moon-Watson is African American and Pinon is an older Latino actor. The obvious differences invited —perhaps even demanded — changing how certain moments would play out.

“I see him as a guy kind of drifting right now,” Pinon says of the backstory he has given his Ben. “He has a family in another state and he’s come here looking for work. Then everything goes crazy and he runs into these people. There’s part of him that just wants to go home, but he finds Barbra and these other people and there’s a bit of parental protectiveness that comes out instinctively.”

Donze has loved the challenge, as long as she can keep all the details straight.

“With Andy, I’m still the more typical Barbra. The naive, green and nervous Barbra,” she says. “With Bryant, he plays more of a college student, so I play more of a mature Barbra. I’m a little more wise to the world and to things that have happened. There’s definitely a different dynamic. I’m sassy, and kind of mean sometimes, which is kind of fun, and a refreshing twist for me. But I’ll catch myself — I’ll have different blocking, different lines, different little add ins.”

The ‘pivot’ is noticeable and interesting to watch, for those who get to see more than one performance of the sold-out run. The cast remains largely the same otherwise, and the lived-in quality that provides brings out finer details and dimension in the characters, while also elevates and maintains the tension needed to make NOTLD so much fun year in and year out.

While the rarity of horror in live theater remains a problem, the continuing success of such an enthusiastic production like this shows just how far you can go with talent, enthusiasm, and yeah, a whole bunch of zombies.