20 Years Later, ‘Devil’s Backbone’ Is All Too Relevant 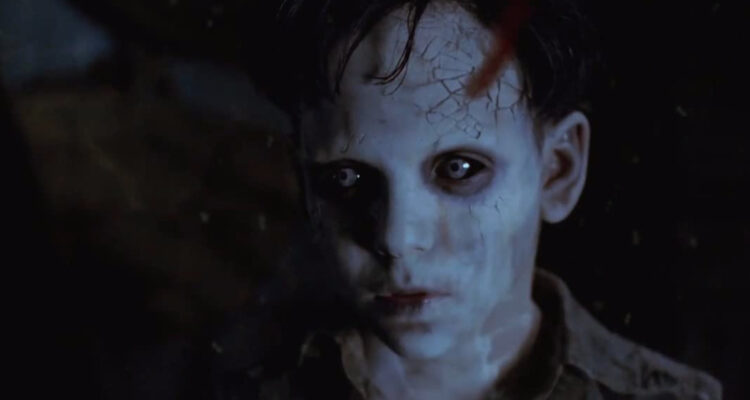 “What is a ghost? A tragedy condemned to repeat itself time and again? An instant of pain, perhaps. Something dead which still seems to be alive. An emotion suspended in time. Like a blurred photograph. Like an insect trapped in amber.” – Dr. Casares,  from Guillermo del Toro’s “The Devil’s Backbone”

Watching a Guillermo del Toro film inevitably leaves you with an existential question. The writer-director mixes entertainment and moral themes, usually centered around monsters and men.

This was del Toro’s project of over fourteen years. What started out as his college thesis ended up as one of his more personal films and, for some, a comeback after his struggle with Mimic (1997), which was anticipated to be his ticket to Hollywood. So, he went back to his independent roots with The Devil’s Backbone. “A microcosm of the Spanish Civil War through a gothic romance with a ghost” is what del Toro called his film in a 2006 interview with The Guardian newspaper.

The war is of great sentimental value to del Toro, who promised to dedicate a trilogy to the historical event. The Devil’s Backbone and Pan’s Labyrinth are two of those. “Both movies filter the tragedy and trauma of war through the imagination of children,” Dillon says. Considered to be brother and sister movies, they are filled with anti-fascist and anti-institutional messages.

The use of children as the storytellers and their accompanying innocence allows for a sensitive story about the war, what del Toro calls a “household war.” Aitana Guia, history professor at Cal State Fullerton, says political ideologies ultimately caused rifts within families, brothers to fight on opposing sides, and neighbors to turn their backs on each other.

And it remains a moment of the 20th Century most Americans today know little to nothing about.

“In 1931 a republic was implemented, and the parties behind the republican model wanted to reform the country. The country was undeveloped economically and very polarized in terms of socioeconomic status. At the time, ninety percent of the population were poor, and the elites were not keen on having a constitutional liberal system. So, all the wealthy people, the industrialists, and the landowners, who were very connected to the church and the army, banded together behind some generals to plot a coup against the republican government,” Guia says.

“It’s not bad to think of the second Spanish Republic as a kind of revolutionary moment for Spain,” she says. “They were trying to do too many things too fast, and there was a backlash from the established elites. So, in 1936, there was a coup and the two sides… the Republicans, which was the legitimate government, and the Nationalists, which was led eventually by general Francisco Franco fought each other in a brutal war for three years, and eventually, the Nationalists won militarily.” She calls the war the “first battle against fascism.”

Del Toro’s distaste for fascism and structure comes through in the form of monsters and his imperfect but good-willed characters.

“That’s why I love monsters. Because they represent a side of us we should actually embrace and celebrate… I think that everything we try to deny about our bodies and our lives – about being fallible and mortal, that we’re going to rot, and that our armpits smell, that we are imperfect, that we sin and screw up – all these are the things that actually make us human. And that’s why I try to make the monsters the heroes in my movies,” del Toro told The Guardian.

But for all the monsters, Dillon says it’s really about people.

“I think monsters for him emphasize freedom and imagination over oppression and control. That is what makes him a humanist,” Dillon says. Pacific Rim is a notable exception because it attributes mechanization to the protagonists, and del Toro juxtaposes the mechanical and organized with the messy and flawed, with the latter often coming out victorious or favorable in the eyes of del Toro. He noted that in The Devil’s Backbone, those themes are more subtle, but the film does deal with a haunting ghost who drowns the villain and an undetonated bomb buried in the middle of the orphanage’s courtyard.

“The ability to understand the supernatural or embrace monsters and all that sort of lack of control is a way to fight against a system that exists only to brutalize and control you, which is what fascism is,” Dillon says.

This film features a group of older children that Dillon views as a representation of the circumstances and themes of the war. He reads the infighting between them as an allegory for the Republic of Spain when the left-leaning parties caused a “civil war within a civil war.” Ultimately, he said the inability to unite is “what contributed to the defeat in the Spanish Civil War. That’s where the allegory becomes really relevant.”

Carlos, the main character, is another common theme in del Toro’s storytelling.

Like many of del Toro’s films, The Devil’s Backbone features gruesome violence, but Dillon recognizes an intention behind it. “[Del Toro] can be a little bit more brutal toward the people who ‘deserve it’ but also tender toward those who are the victims of those people,” but that there is also contention with characters who “deserve it” because that is also subjective.

“Even though his stories are about chaos and monsters and creatures and slime and screaming, there is an elegance to his approach to morality,” Dillon says. “It’s not just that he’s telling stories about moral people. He’s making moral decisions in these movies about which characters are meant to be sympathetic and which ones are not and what kind of violence is visited upon people, and how we are supposed to feel about it. He understands that some violence can only be understood as tragic and some violence you can have a little fun with because he’s also an entertainer and a genre filmmaker.”

The ending is not one of closure. We watch the boys fade into the long road ahead without any prospects. The gold was at their disposal, but they walked away with each other in arms. Dillon says “If that gold is symbolic of corruption and betrayal and evil, then the kids should absolutely not be going to get that gold. The fact that they leave it behind indicates they might be ok. [The children] will survive morally,” Dillon says, “This seems consistent with what del Toro seems to be doing, which is arguing that goodness will prevail.”

Twenty years later, the film’s message is pertinent, especially after an anti-democratic scare in the United States, but Dillon worries that the specifics of the film could bog down important takeaways.

“I would hope that Devil’s Backbone isn’t too symbolically associated with 1939 that we blind ourselves or neglect to recognize that some of these themes are relevant today,” he says.

“The movie works on one level as a ghost story, but it has to work on a second, deeper level as an allegory, and my concern would be that the allegory seems so specific to the Spanish situation in 1939 that we lose sight of how relevant it actually is if you take the time to understand it. I think the problem, therefore, is not with the film, it’s that people in the US don’t really know much about the Spanish Civil War,” he said.

Guia thinks that although the contexts are entirely different, there are some similarities, mainly that “liberal democracies have to be defended against those enemies from within that want a more authoritarian government.

“I think people have a moral obligation to know about history. I believe it’s a moral necessity to think about and reason with and understand how history plays a role in your understanding of the world you live in today. If there are movies out there that seem to be sensitive to those topics, the better educated you are at being able to interpret movies is also a plus because we often communicate ideas through stories,” Dillon says.

Guia says this is the exact reason she became a historian. “The idea is to understand the past so you can prevent the same mistakes from happening again. People tend to be very presentist, and they don’t draw connections, they don’t draw parallelisms, they don’t give you a larger context for things” she says.

Dillon says the film is a del Toro essential. “I think it’s maybe his most elegant movie, and it’s definitely one of his masterful movies.” If he were teaching a course on del Toro, The Devil’s Backbone would have to be covered. “True fans of horror movies would be willing to put up with some subtitles to watch a really good, really scary movie.”